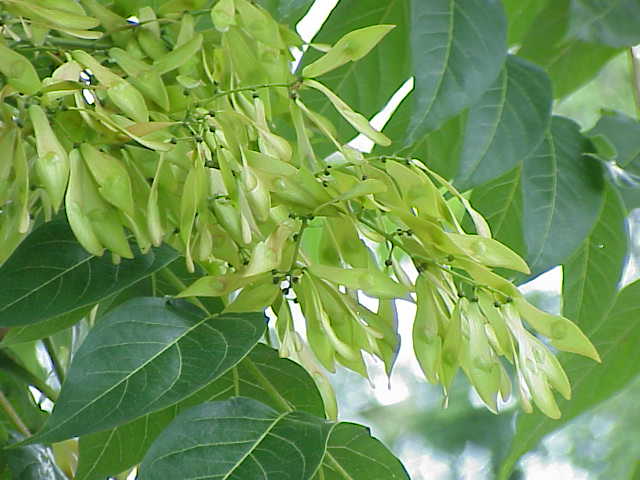 "Ailanthus" (derived from ailanto, an word probably meaning "tree of the gods" or "tree of heaven") is a genus of s belonging to the family , in the order (formerly or ). The genus is native from east south to northern .

They are fast-growing trees growing to 25-45 m tall, with spreading branches and large (40-100 cm) pinnate leaves with 15-41 long pointed leaflets, the terminal leaflet normally present, and the basal pairs of leaflets often lobed at their bases. The small yellow to greenish s are borne on branched panicles they turn reddish later in the year and eventually brown they stay on the tree for a long time; the male flowers have a strong odour. The odour tends to resemble the smell of strong cat urine or the spray of a male cat. Also, touching the leaves leaves an unpleasant smell on the hands. The is a samara drawn out into a long wing with the seed in the middle. The wood is fine grained and satiny.

A silk spinning moth, the ("Samia cynthia"), lives on "Ailanthus" leaves, and yields a silk more durable and cheaper than mulberry silk, but inferior to it in fineness and gloss. This moth has been introduced to the eastern United States and is common near many towns; it is about 12 cm across, with angulated wings, and in colour olive brown, with white markings. Other whose e feed on "Ailanthus" include "Endoclita malabaricus".

This is considered an in North America. Ailanthus is capable of forming thick blankets of roots and heavy shade to the extent that native species are prevented from being able to reclaim an area that has been logged or deforested, as well as areas that have been heavily developed.Fact|date=June 2008

In spite of being an on many places, this tree often grows where no others will. Thus it does not replace native species or more desirable trees and may only compete with weeds which have little value.Fact|date=June 2008