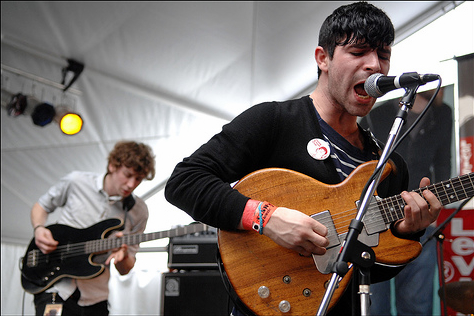 
Foals are a band from Oxford, . The band are signed with in Europe and in the USA. A full length album—entitled "Antidotes"—was released on , in the UK, and in the USA. It was produced by Dave Sitek of [ [http://www.gigwise.com/news.asp?contentid=30933 GIGWISE, TV on the Radio's Dave Sitek To Produce Foals ] ] though the band chose to mix the record themselves. [ [http://www.thestoolpigeon.co.uk/14/giddy-up.html The Stool Pigeon, Foals Get On The High Horse] ]

Childhood friends Jack and Yannis were previously in a cult band named The Edmund Fitzgerald but this was disbanded after they claimed that things had become "too serious" and they wanted to have more "fun making their music." Try Harder Records (, , Jonquil, ) are set to release a double CD retrospective of all previously released and unreleased Edmund Fitzgerald material around September 2008.

Jimmy Smith was previously a student at the and graduated in Geography. He and Walter Gervers, having been friends at , also attended by members of , were in a small Oxford band called Face Meets Grill that split shortly before Foals formed. Jimmy is the only member of the band to have completed his degree—the other four members all quit their respective universities (including Yannis and Edwin leaving their courses in English language and literature at the ) when the band signed to Transgressive. Lead singer of Youthmovie Soundtrack Strategies (now ), Andrew Mears, [ [http://www.drownedinsound.com/articles/2781586 DROWNED IN SOUND, Foaling around: founders' foibles dissected ] ] originally formed the band, playing as a guitarist and the lead singer. He was around for their first single release on , "Try This on Your Piano/Look at My Furrows of Worry", but left after several months so he could concentrate on Youthmovies' forthcoming album "Good Nature". With the addition of Edwin who plays keyboards, and who Yannis met while working at a cocktail bar in Oxford, the current line up was complete.

The band's influences are varied: they cite minimal techno works such as 's "Plumbicon" and reggae act as major sources of inspiration fact|date=May 2008 whilst it is also noted that certain members of Foals believe that influential composer is "the best musical act of all time"fact|date=February 2008. In addition, Yannis has stated "we’re definitely fans of the Talking Heads" [ [http://www.nowtoronto.com/music/story.cfm?content=162875 NOW Magazine // Music // Music Feature // Foals race-ready ] ] , a band whose influences can be heard in Foals' recordings. He has also said his favourite band is math rock outfit fact|date=May 2008.

Vocalist Yannis Philippakis was arrested after a fight broke out July 19, 2008 at a festival in Barcelona. Media reports indicated that he and other members of the Foals and were involved in breaking up an alleged racist attack on singer Kele Okereke that also involved the entourage of singer . Philippakis was arrested in the aftermath. [ [http://music.guardian.co.uk/news/story/0,,2291957,00.html John Lydon accused of racist attack on Kele Okereke | Music | guardian.co.uk ] ]

They have recently said they have started work on their next work, which they have named, Maybe Hawaii maybe not, acording to their myspace bulletins. They have also released a new single, Olympic airways which was released on the 6th October 2008.

Foals have appeared on several television programmes, including an appearance in a mini-episode of "Skins" in August 2007, shown exclusively on . The episode mimicked their tendency to play house parties. The band recorded a 5 track live session for ’s Spanking New Sessions in January 2008, featuring Balloons, Red Sox Pugie, Cassius, Olympic Airways and The French Open. The band has also appeared on "", playing their songs "Balloons" and "", as well as T-Mobile's "Transmission" (), "The Album Chart Show" (E4), and "". Philippakis appeared in an episode of "". They also featured at this years Glastonbury (2008) and a live performance of their song, Cassius, was shown on BBC2 that night.They played at "" 2008 in the "" tent on the Saturday of the festival. Their music is also frequently used for idents on TV channel . On October 9, 2008, they played on Jimmy Kimmel Live on ABC Television in the United States.

On Monday 28 July 2008 Foals were guests on Colin Murray's show on BBC Radio 1. They played four songs; The French Open, , Olympic Airways and Balloons, accompanied by two brass musicians who are 'friends of the band' and the drummer from Brooklyn Afro-beat group Antibalas, as well as Foal's own drummer Jack Bevan. Unlike on the album versions, Red Socks Pugie and Olympic Airways included brass and saxophone parts. The Session also included an interview with Yannis and Edwin, in which they talked about the incident on the 19th of July, earlier that month where the band were involved in a brawl at a festival in Barcelona, and Yannis was arrested as a result. [ [http://www.bbc.co.uk/iplayer/console/b00cpsll iPlayer Radio Console ] ]

Foals regularly perform DJ gigs (Edwin is the main DJ in the band) and as well as playing V Festivals and nights such as Field Day After Party @ The End; they also launched new club night Vice Versa at Last Days of Decadence in East London. [ [http://www.nme.com/news/foals/38579 Foals to DJ at new London club | News | NME.COM ] ]