Disney pin trading is the buying and trading of collectible pins and related items featuring Disney characters, attractions, icons, events and other elements. The practice is a hobby officially supported and promoted by Disney.[1] Many thousands of unique pins have been created over the years. Pins are available for a limited time; the base price for a pin is US$6.95. Limited edition pins, and special pins (e.g. pins that have a dangle, pin-on-pin, flocking, lenticular, light-up, moving element, 3-D element, etc.) cost up to $14.95. Featured Artist and Jumbo Pins cost between $20 and $35 and Super Jumbo pins cost upwards of, and sometimes beyond, $75. Each guest may purchase up to two pins of each style per day. Pins are frequently released at special events, movie premiers, pin trading events or to commemorate the opening day of a new attraction. Some pins have appreciated well on the secondary market and have reached prices of over US$500 at venues such as eBay. Most Disney pins are enamel or enamel cloisonné with a metal base. The backs of each pin are very sharp and should be used with care by young collectors.

Pins have always been present at Disney parks, but it wasn't until 1999 as part of the Millennium Celebration [2] that Disney Pin Trading at the Walt Disney World Resort was introduced. The next year, the craze spread to the Disneyland Resort, which has become the home of most Pin Trading events. Since then, Pin Trading has spread to Disneyland Resort Paris, Tokyo Disney Resort, Hong Kong Disneyland Resort and Disney Cruise Lines with each location creating their own pins and traditions. Although the trading of pins has been suspended in Tokyo Disney Resort, pins are still offered as prizes at carnival games, and a relatively small amount of pins are available.

In all Disney resorts, a large variety of pins are available for purchase and trade. Most merchandise cast members wear pins on lanyards around their necks, or on a pin display card or hip lanyard (a 4” by 5” piece of colored nylon fabric) clipped to their belt. Additional cast members may wear lanyards if pin trading does not distract from their responsibilities; some managers choose to wear lanyards, but ride operators are not permitted. Some cast members wear a teal colored lanyard at Disneyland and a green lanyard at Walt Disney World with pins only tradable to children (12 years or younger).

Each lanyard contains around a dozen unique pins, and cast members must trade with guests if they are presented with an acceptable pin. The cast members may not decline a particular trade based on preference or rarity of the pin, but may decline if the pin is not acceptable or pin trading rules are not being observed.

Each guest may only trade two pins with the same cast member in one day. If the cast member gives his or her lanyard to a different cast member, a guest may trade again with the new cast member even though the physical lanyard is the same.

The specifics of what make a pin acceptable for trading varies from park to park. At Disneyland and California Adventure parks, the cast members are instructed not to accept pins that have a clasp or brooch-type backing (as with jewelry). This limitation is new as of 2008, and notable because it bars cast members from accepting pins that Disney specifically designed and made in the 1980s. The new rule about the pin backing type is printed on brochures and certain informational boards.

Pin Collectors can customize displaying their pins because of the wide variety of pin products Disney produces. Lanyards are available in a wide variety of colors and designs as are lanyard medals. There are many ways to store and display a collector's pins: pin bags, notebooks, frames and cork boards. Collectors can be very creative in displaying their pins and are often easy to spot in the parks with their pin-covered vests, hats, lanyards and fanny packs.[3]

Disney has published a pamphlet on how to trade pins, and tips on Pin Etiquette.[4][5] Among these tips include:

Note that this pin etiquette pamphlet is only a partial list of restrictions, and restrictions as indicated in the above section "Current Pin Trading" also exist. 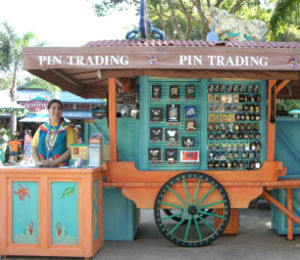 There are many official locations where a guest can find Disney pins for purchase.[6]

According to Disney Store staff, as of 2008, trading pins are no longer sold in stores outside of those located at the theme parks, and are only available through ordering them at the online Disney Store. Disney Shopping has offered limited edition pins on their website since Disney Auctions was closed.

Note*: Pin Trading is not available in Tokyo Disney Resort. Visitors can only purchase pins in the resort and win them from games.

Because there are over 60,000 Disney Pins available, many themes and characters are collected:

The WDW Cast Lanyard Collection was introduced in 2002 to encourage guests to trade pins with cast members. The first series of Lanyard pins consisted of just under 100 pins. Previews of the next year's Lanyard pins are at each September Event, with the pins officially distributed a few weeks later. "Disney's Cast Lanyard Collection" is on the back stamp of each pin in the first two series. Beginning with the third series, pin designers placed Hidden Mickeys on the pins after guests complained that it was difficult to discern Lanyard pins from the other pins on lanyards. In 2007, with the release of the fifth Lanyard series, the name of the series was officially changed to the Hidden Mickey Collection and a collection of 94 of the most popular earlier designs were reissued. When asked about the change the Pin Team responded,

"The name change is based on the current identifier found on Hidden Mickey pins, a small Mickey Mouse icon. "Hidden Mickeys" are also incorporated into many attractions and locations at Disney Theme Parks and Resorts. We felt this change would compliment something fun many Guests were already seeking."[7]

Disneyland Resort has had their own Lanyard Pin Series since 2002. DLR Lanyard Pin Collections have fewer styles than the WDW series, with most DLR series consisting of around 50 pins. Additionally, sets of 12 Hotel Lanyard Pins have been released biannually to DLR hotel guests who receive two pins at their time of check-in to trade. For the 2007 and 2008 Hidden Mickey Collections, pins have been released monthly by series. Scrappers of past DLR Hidden Mickey pins have appeared on the secondary market months before their official release dates. In an effort to combat this practice, designs for the 2008 and 2009 series, although previously shown at DLR Pin Trading Nights, have been released monthly.

Pins have been available as merchandise at WDW and DLR hard ticket events since the late 1990s. After the Millennium Celebration, annual Pin Events were established to provide event-exclusive pins and opportunities for traders to socialize. The largest and most notable event is the September Event, held at Epcot annually. The 2008's event is Disney's Pin Celebration 2008 - Pin Trading University,[8] which was held from September 5–7, 2008. Occasionally, special events are planned at the Walt Disney World Resort beyond the September Event. Expedition Pins[9] allowed Pin Traders to take over Disney's Animal Kingdom after hours.

Disneyland Resort offers pin events as well, although not as frequently. Their "Camp Pin-e-ha-ha" event was well received, and the Disney Day Campin' Event on June 21 was part of their annual summer-long Pin Festival. 2008 saw Mickey's Pin Odyssey and in 2009 Disneyland hosted the Haunted Mansion O'Pin House. Both events featured weekly releases of themed pins. Next up is the Disney Summer Pin Festival 2010 - Dateline: Disneyland. The official date of this event will be released October 1, 2009.[10]

Disneyland Resort Paris also stages semiannual events including the DroPIN event to celebrate the opening of their Tower of Terror. All of the events feature pin games, exclusive pins and children's activities, and most have pin gifts to remember the event by. Each Resort also offers a monthly Pin Trading Nights with pin boards, games, and kid's areas.

Hong Kong Disneyland introduced its first Pin Trading Fun Day in 2007. The park continues to organize the pin event once a year during a weekend in the Easter holiday period. The event features activities such as "Magical Moment", "Surprise Moment" and other games. Also, a special limited edition pin box set will be released as well during the event.