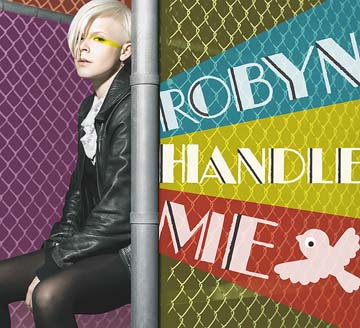 "Handle Me" is the third single to be released off Swedish pop 's 2005 self-titled album in both and the despite the first two singles for each territory being two different songs. It was released in the UK on Monday 29th October 2007 as the follow-up to her 1st UK #1 single "With Every Heartbeat".

Despite not having a physical single release, a video was filmed for the song. The video itself is quite low budget compared with her previous video for , and compared with the later UK video. It first shows Robyn with a group of people inside a club, wearing a series of dresses and sneakers. Later scenes show her walking outside at night with the same group, and in a red dress bicycling.

A different music video for the UK was released on , . The video has been a success getting over 170,000 views on in less than a day. The video has been praised by its viewers for its uniqueness and creativity. It is also one of the most commented on videos on YouTube, due to many viewers; incorrect assumption that Robyn is a man. The video features various solo shots of Robyn in cubes dancing, occasionally shown in silhouette or with various props such as a chair, lifejackets or other, smaller boxes. Several shots show only her head encased in a box.