Chelva (Valencian: Xelva) is a municipality in the comarca of Los Serranos in the Valencian Community, Spain.

Chelva's area is about 192 km2. It is in the middle of the mountains, and about 52% of the land is covered by a typical mediterranean wood. There are two rivers in Chelva's district, one with the same name of the village (Chelva) and the River Turia. They join in Domeño's district.

Chelva has a continental climate with some rain in autum and spring. In winter, it is cold and in some parts of the mountains snow is common.

Since 1794 when its population was 7.200 inhabitants, the census has been registring a gradual fall to less than 2000 inhabitants nowadays. The population is distributed in the main city and two small villages. 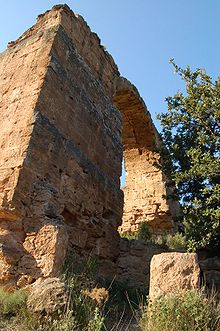 The oldest archeological sites in Chelva are some paintings from the Neolithic. From the Bronze Age we find a site in Nieva del Medio. From the iberian culture we have remains of two villages in Torrecilla and Castillejo de Alcotas where a lot of geometrically decorate ceramic has been found, and some walls can still be seen.

The most important remains in Chelva's area are from the roman epoch. From then we find the aqueduct called Peña Cortada, that goes along Tuejar, Chelva, Calles, and Domeño, with an unknown destination.

In the eleventh century it was born the Muslim nucleus. A fortress was built and next to it the original city center was developed with the name of Benacacira. It was rounded by a wall with four doors (one is still visible, San Cristobal). Chelva had a considerable importance during the Muslim rule.

Muslim rule finished in 1194, when the city was conquered by Pedro II de Aragón. In 1214 was taken up again by Muslims but in 1238 was definitely re-conquered by Christian troops.

In 1390 was repopulated with Christians and Juan I de Aragón donated Chelva's viscounty to Pedro Ladron de Vilanova, later belonged to Frigolas family and finally to Villahermosa Duke.

During the Revolt of the Brotherhoods[when?] it was occupied by agermanados troops. In 1839 during the Carlist War, the city was fortified and converted in a hospital by General Cabrera.

San Antón: 17 January. In the closest weekend to this date people in Chelva make big fires to get the higher amount of "jewels" (alive chickens). Moreover during this weekend an international festival of oral narrative is performed: Cuentantón

Holy week. During the Holy week, apart from traditional religious celebrations, Chelva do a very special act. The first Sunday of Easter, after Encuentro's procession, thousands of "aleluyas" are thrown from the top of the church. These little pieces of paper are blessed and have religious inscriptions. People fight to get them because, according to tradition, they get luck to those who put them behind doors and windows forming a cross.

May fiesta: 30 April. Typical manifestation of traditional folklore. Accompanied by a group of musics, people go around the city singing "Mayos". These are funny lines that, formerly, boys used to sing to girls in order to seduce them.

Youth week July. During the week there are a lot of activities but the most important and the funniest is the paella competition. On Friday night all the people go to Mayor square to make the tastiest paella. After that there is a band that plays all night.

Our Lady of Remedio August. A hole week full of activities, processions, and everynight a different band playing music. There are sports competitions like football indoor, marathon, chees, fishing, and many more. Also there are fireworks.