DENK is an Austrian rock band from Vienna (Schwechat), formed around the charismatic lead singer Birgit Denk, who writes the band's lyrics in Viennese dialect. 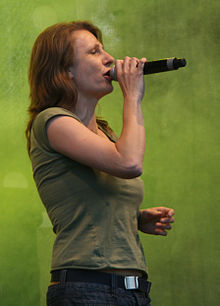 Their first maxi single was self-titled and had five tracks. They played in locations like the Wiener Reigen and the Chelsea. Their first big success came after their first album Ausgesteckt, a live CD of an acoustic concert. From then on, their audience grew

They released their second album Hoits eich an! in 2004. This was a studio recording, this time with electric guitars (they called it "wild & dangerous"). There are also two covers in this release, that Birgit Denk translated into the Viennese dialect.

After their second release, DENK held concerts that continued to draw bigger crowds, whose highlights included playing with S.T.S and headlining at Donauinselfest. In 2006, DENK was nominated for two Amadeus Austrian Music Awards.

In 2006 Laut was released, DENK toured Germany and Austria and held two concerts in Rappoltenkirchen.

On 9 March 2007, the album Ausgesteck in Rappoltkirchen and DVD of the same name were released. The DVD featured recordings from the two concerts in November 2006 in Pezihaus Rappoltenkirchen.

In 2008 the band went on tour again for their "Es is guad" tour. On this tour they played a combination of electric and acoustic shows.

In 2010, the studio album "Tua weida" was released in celebration of the band's tenth anniversary.