Death Dealer is an iconic 1973 fantasy painting by Frank Frazetta. It depicts a menacing armor-clad warrior with a horned helmet, whose facial features are obscured by shadow, atop a horse, holding a bloody axe and shield. The image eventually led to spin-offs of varying merchandise, including subsequent paintings of the warrior, novels, statues, and most recently, a comic book, published by Image Comics, and related D&D adventures, published by Goodman Games.

Frazetta later painted several other Death Dealer paintings, including ones to be used as covers for the comic book series (see below).

The painting was used as the cover on Molly Hatchet's first album in 1978.

Prisoner of the Horned Helmet, in which we are introduced to the protagonist, he is given the name Gath of Baal. In the book he is a tribeless barbarian in a large forest that, according to the description on the back will one day become the mediterranean sea. A large Mongol-esque invasion force by the name of the Kizzaks try to invade the forest, and one of Gath's love interests, who is given the name Cobra decides to help him by giving him a helmet which was possessed by the god of death. The helmet gives him godlike power, but at the same time also tortures Gath. With the help of various people found within the forest he manages to control the helmet, and fights against the Kizzak horde, eventually winning.

and "Rise of the Death Dealer".

Sculptor Randy Bowen produced the first statues based upon the character. Dark Horse Comics published several statues of the character, both full-size and miniature. Diamond Distributors published a series of Frank Frazetta action figures in the form of statues. Among the works were the original Death Dealer and one of the future renditions. Filmswords.com has created a helmet based upon that of the Dealer.

The first Death Dealer comic book series was published in 1995 by the company Verotik. The 4-issue series was written by musician Glenn Danzig and illustrated by Simon Bisley (issue 1), Liam Sharp (issues 2 and 3), and by Arthur Suydam (issue 4). Frazetta provided covers for the books as well.

In 2007, Image Comics/Frazetta Comics published the highly acclaimed "Death Dealer: Shadows of Mirahan" 6 issue miniseries featuring Death Dealer in the first story fully approved by Frank Frazetta. The book's creators are Nat Jones, Jay Fotos, and Joshua Ortega. The story was written by Jones, Fotos and Ortega, with pencils and inks by Jones, and colors by Fotos. The story tells of an ancient land, and two warring nations fighting in an epic war. The Death Dealer appears on the field of battle and slaughters both sides. When the two kingdoms forged an alliance, the Dealer disappears for years but returns years later. Image's Death Dealer comic inspired a series of Dungeons & Dragons adventures published by Goodman Games.

The image of the Death Dealer also appears on the gas tank of a Jesse James motorcycle. 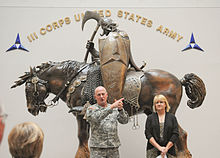 A statue of the Death Dealer is unveiled at Fort Hood, Tex.