In mathematics, a system of linear equations is considered overdetermined if there are more equations than unknowns.[1] The terminology can be described in terms of the concept of counting constraints. Each unknown can be seen as an available degree of freedom. Each equation introduced into the system can be viewed as a constraint that restricts one degree of freedom.

An example in two dimensions 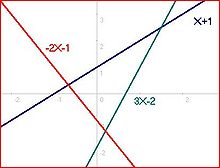 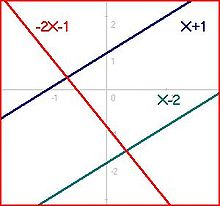 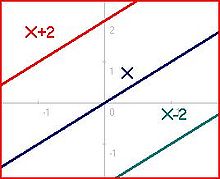 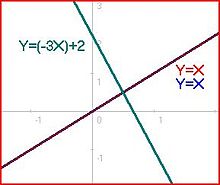 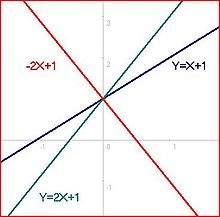 #5 A system of three equations, three lines, one intersection, one linearly dependent 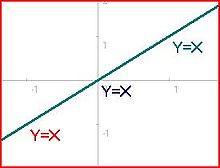 Consider the system of 3 equations and 2 unknowns (x1 and x2):

Note: equations above correspond to picture #1 such that x1 = x and x2 = y in the Cartesian coordinate plane

There are three "solutions" to the system as can be determined from the graph's intersections, one for each pair of linear equations: between one and two (0.2, −1.4), between one and three (−2/3, 1/3), between two and three (1.5, 2.5). However there is no solution that satisfies all three simultaneously. Systems of this variety are deemed inconsistent.

Notice that the number of rows outnumber the number of columns. In linear algebra the concepts of row space, column space and null space are important for determining the properties of matrices. The informal discussion of constraints and degrees of freedom above relate directly to these more formal concepts.

The homogeneous case is always consistent (because there is a trivial, all-zero solution). There are two cases, in rough terms: there is just the trivial solution, or the trivial solution plus an infinite set of solutions, of nature determined by the number of linearly dependent equations.

For M ≥ N, there may be no solution other than all values being 0. There will be other solutions just when the system of equations has enough dependencies (linearly dependent elements), so that the number of effective constraints is less than the apparent number M; more precisely the system must reduce to at most N − 1 equations. All we can be sure about is that it will reduce to at most N.

When studying systems of linear equations, Li=ci for 1 ≤ i ≤ M, in variables X1, X2, ..., XN the equations Li are sometimes linearly dependent. These dependent equations (often described in terms of vectors) lead to three possible cases for an overdetermined system.

Note:(*Equations and unknowns can correspond to the rows and columns of a matrix respectively)

The discussion is more convincing, perhaps, when translated into the geometric language of intersecting hyperplanes. The homogeneous case applies to hyperplanes through a given point, taken as origin of coordinates. The inhomogeneous case is for general hyperplanes, which may therefore exhibit parallelism or intersect. A sequence of hyperplanes H1, H2, ..., HM gives rise to intersections of the first k, which are expected to drop in dimension 1 each time. If M > N, the dimension of the ambient space, we expect the intersection to be empty, and this is precisely the overdetermined case.

The concept can also be applied to more general systems of equations, such as partial differential equations.