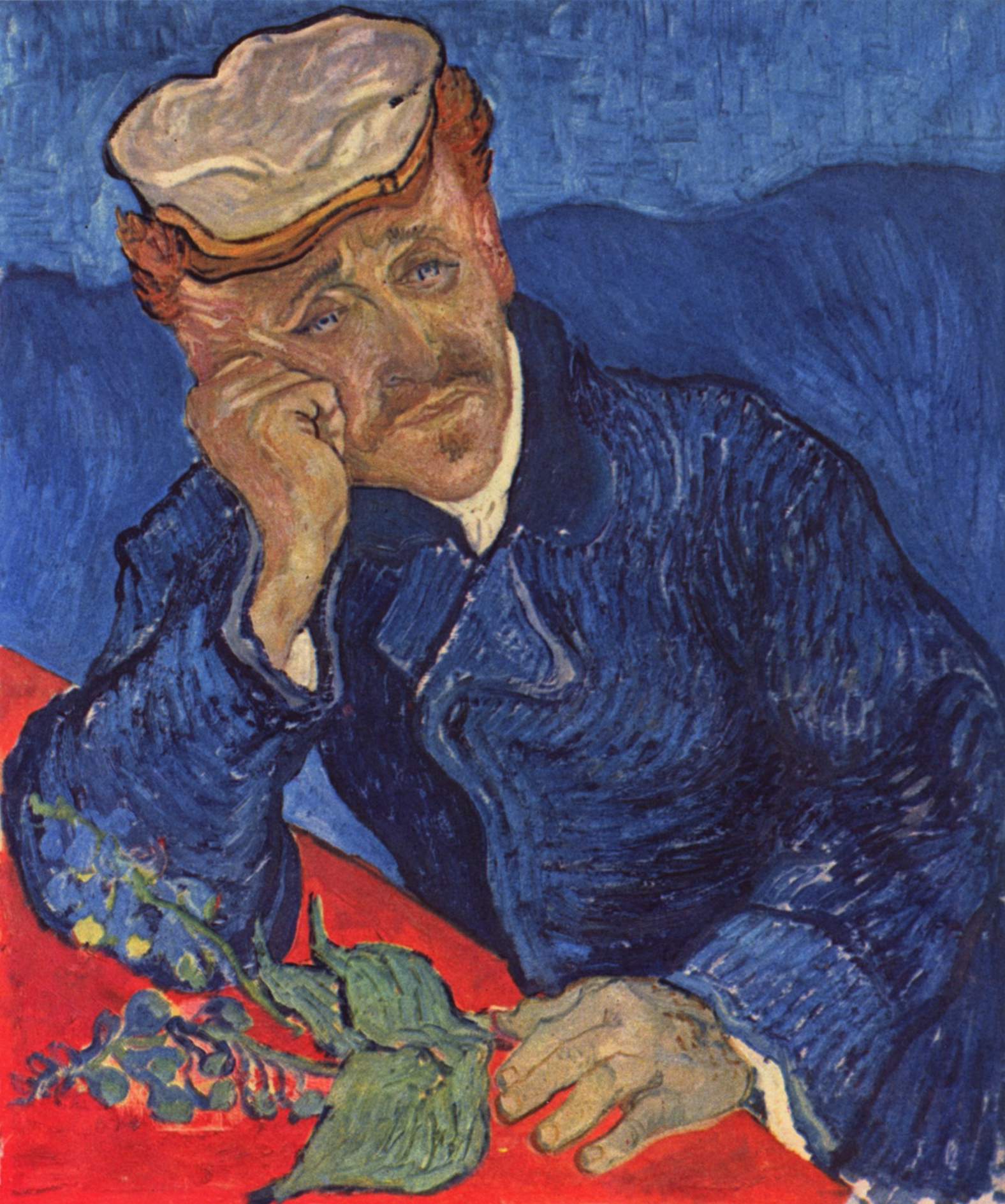 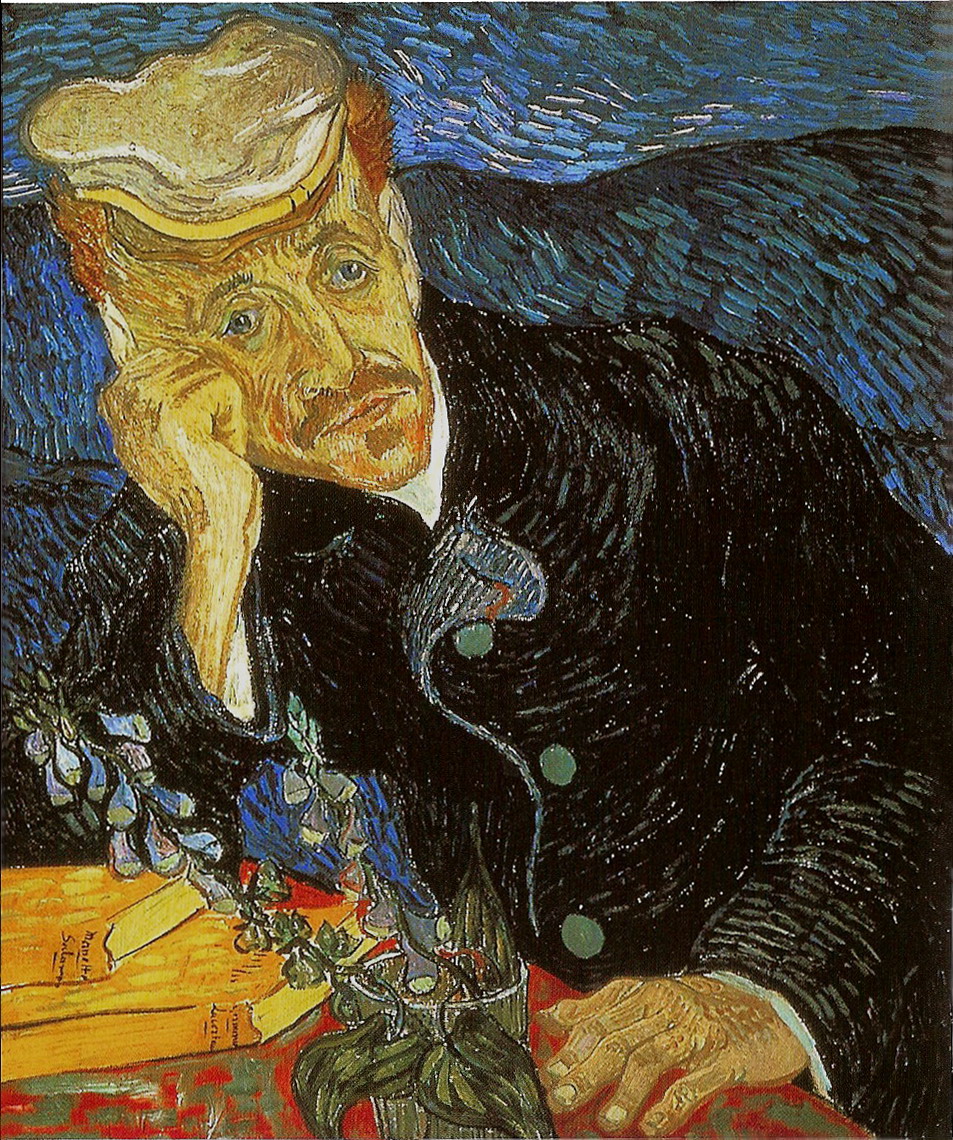 "Portrait of Dr. Gachet" is one of the most revered paintings by Dutch artist and fetched a record price of $82.5 million ($75 million, plus a 10 percent buyer's commission) [ [http://www.usnews.com/usnews/doubleissue/mysteries/portrait.htm Van Gogh's vanishing act: A high-cost, low-profile canvas] , U.S. News Online] in 1990.

There are two authentic versions of this portrait, both painted in June 1890 during the last months of Van Gogh's life. Both show Doctor Gachet sitting at a table and leaning his head onto his right arm, but they are easily differentiated.

The portraits were painted in close to , and depict Doctor with a plant. Gachet took care of Van Gogh during the artist's last months. Gachet was a hobby painter and became good friends with Van Gogh. The in the painting is a plant from which is extracted for the treatment of certain heart complaints; the foxglove is thereby an attribute of Gachet as a doctor.

Van Gogh's thoughts returned several times to the painting by of in the madhouse. After a visit with to to see 's collection in the , Van Gogh wrote to his brother, Theo, asking if he could find a copy of the lithograph after the painting. [Letter [http://webexhibits.org/vangogh/letter/18/564.htm 564] ] . Three and a half months earlier, he had been thinking of the painting as an example of the sort of portraits he wanted to paint: "But it would be more in harmony with what Eugène Delacroix attempted and brought off in his "Tasso in Prison", and many other pictures, representing a real man. Ah! portraiture, portraiture with the thought, the soul of the model in it, that is what I think must come." [Letter [http://webexhibits.org/vangogh/letter/18/531.htm 531] ]

Van Gogh wrote to his brother in 1890 about the painting:

The first version plays an important role in the crime novel "Lifeguard (2005)" by and Andrew Gross.

* The original version of this painting was sold by van Gogh's sister-in-law for 300 s in 1897. Subsequently it was sold respectively to (1904), Kessler (1904), and Druet (1910). In 1911 the painting was acquired by the (Städtische Galerie) in , and hung there until 1933, when the painting was put in a hidden room. In 1937, it was confiscated by the Reich , an arm of the Nazi government that sought to rid pre-war Germany of so-called . It came into the possession of , who quickly sold it to a dealer in . The dealer in turn sold it to a collector, , who brought it with him when he fled to , where the work was often lent to the . Kramarsky's family put the painting up for auction in 1990. The painting became famous on , , when Japanese businessman Ryoei Saito paid US$82.5 million for it at auction in , making it the most expensive painting in the world up to that time. Saito, the honorary chairman of Daishowa Paper Manufacturing Co. and then 75 years old, caused a scandal when he said he would have the Van Gogh painting cremated with him after his death. He later said, "What I really wanted to [express] was my wish to preserve the paintings forever." Saito, his aides explained, was using a figure of speech, and his threatening to torch the masterpiece was just an expression of intense affection for it. Later he said he would consider giving the paintings to his government or a museum. After his death in 1996, the exact location and ownership of the portrait had been shrouded in mystery. In early 2007, however, reports [http://www.artsjournal.com/culturegrrl/2007/01/dr_gachet_sighting_it_was_flot.html] surfaced that the painting had been sold a decade earlier by Saito or his estate to the Austrian-born investment fund manager Wolfgang Flöttl. Flöttl, in turn, had reportedly been forced by financial reversals to sell the painting to parties as yet unknown.
* The second version of the portrait is in the possession of the , , .