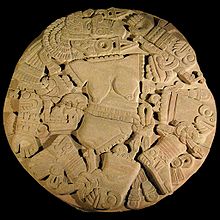 Disk depicting a dismembered Coyolxauhqui which was found during construction in 1978 in Mexico City. Its discovery led to the excavation of the Templo Mayor.

In Aztec mythology, Coyolxauhqui (Classical Nahuatl: Coyolxāuhqui [kojoɬˈʃaːʍki], "Face painted with Bells") was a daughter of Coatlicue and Mixcoatl and is the leader of the Centzon Huitznahuas, the star gods. Coyolxauhqui was a powerful magician and led her siblings in an attack on their mother, Coatlicue, because Coatlicue had become pregnant.

The pregnancy of Coatlicue, the maternal Earth deity, made her other children embarrassed, including her oldest daughter, Coyolxauhqui. As she swept the temple, a few hummingbird feathers fell into her chest. Coatlicue’s child, Huitzilopochtli, sprang from her womb in full war armor and killed Coyolxauhqui, along with their 400 brothers and sisters. He cut off her limbs, then tossed her head into the sky where it became the moon, so that his mother would be comforted in seeing her daughter in the sky every night.

A large shield-shaped stone relief reflecting this story was found at the base of the stairs of the Templo Mayor. On this disk, Coyolxauhqui is shown spread out on her side, with her head, arms and legs chopped away from her body. The orbiting full moon in the stone carving reflects her position as the moon goddess. She is distinguished by bells of eagle down in her hair, a bell symbol on her cheek, and an ear tab showing the Mexica year sign. As with images of her mother, she is shown with a skull tied to her belt. Scholars also believe that the decapitation and destruction of Coyolxauhqui is reflected in the pattern of warrior ritual sacrifice. First, captives’ hearts were cut out. Then the bodies were cast from the temple. At the bottom of the stairs, near the Coyolxauhqui stone, the bodies were decapitated and dismembered.

Coyolxauhqui’s celestial associations are not limited to the moon. Other scholars believe that she should be understood as the Goddess of the Milky Way, or be associated with patterns of stars associated with Huitzilopochtli.