Fountain Square is one of six designated cultural districts in . In 1835, Calvin Fletcher and Nicholas McCarty purchased a convert|264|acre|km2|sing=on farm to plat what became the Fountain Square neighborhood. Although the earliest settlement was sparse and primarily residential, substantial settlement and rapid commercial growth occurred in the area beginning in the 1870s. Much of the development was fueled by a large number of German immigrants settling in the area. German and German-American merchants helped to establish much of the character in this neighborhood.

The Virginia Avenue corridor began to emerge as the South side's commercial center in the 1860s. When the Citizen's Street Railway Company laid tracks down Virginia Avenue and located a turnaround at the intersection of Virginia Avenue, Shelby, and Prospect Streets in 1864, the neighborhood began to be known as "the End" by local residents. 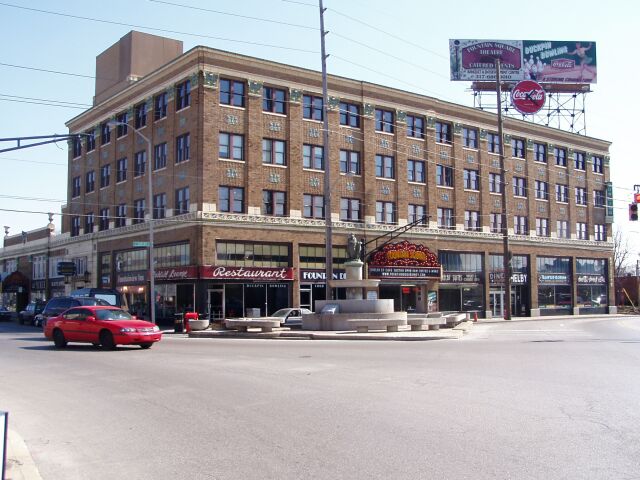 Fountain Square also played an important part in the Indianapolis theater heritage. The area had more operating theaters than could be found in any part of Indianapolis from 1910 to 1950. Fountain Square continued to fill the role of "downtown" for the south side well into the 1960s, offering multiple movie/vaudeville theaters, independent banks, a wide range of retail, and churches/social centers serving a range of ethnicities.

Between 1950 and 1970, neighborhood resident composition changed as the largely German, Irish, and Italian original residents moved further out. The construction of the interstate system in the 1970s led to the demolition of hundreds of homes and many businesses and churches, displacing residents and adding to the suburban flight that began in the 60s. This confluence of events triggered a 15-year period of decline.

The Fountain Square commercial area began to benefit from concentrated reinvestment in the late 1990s, and is becoming better known as a home for unique restaurants, art galleries and studios, live entertainment, antiques, and small professional offices. Thanks to the efforts of Southeast Neighborhood Development, and projects like the Wheeler Arts Community and the Murphy Art Center, the area is developing as a primary live/work community for Indianapolis artists. The gradual transformation of the commercial district has attracted growing investment in surrounding residential areas, with both long-time residents and new homeowners participating in improving the quality of area homes. Neighborhood support services, such as the Fountain Square Branch [http://www.imcpl.org/about/locations/fountainsquare.html] of the , are becoming plentiful, and the area is becoming a home for organizations of all types.

The designation of Fountain Square as one of Indiana's first urban Main Street programs, coupled with the distinction of being named as one of the six Indianapolis Cultural Districts, has the commercial district poised for further reinvestment and improvement. Long-term projects are in the planning stages, including upgrades to the streetscape and fountain, developing additional public space, and creating gateways and directional signs that visually define Fountain Square as one of the unique neighborhoods of Indianapolis.