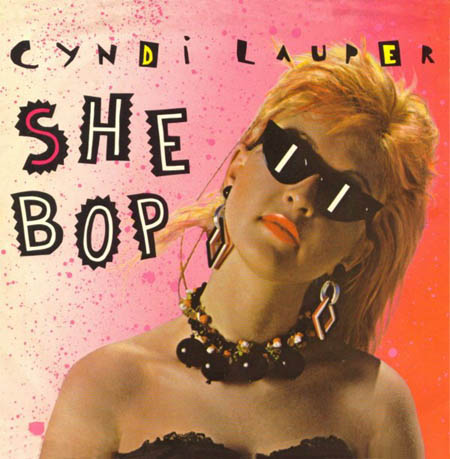 "She Bop" was the third commercially released solo single by American singer .

The song was controversial, owing to lyrics that addressed . Part of the lyrics, "They say I better stop - or I'll go blind"' [http://www.oldielyrics.com/lyrics/cyndi_lauper/she_bop.html] is an allusion to a common myth about masturbation.It was also included on the 's "" list, due to its sexual lyrics. Other songs on the list included tracks by Madonna, Prince, , among others. This led to the creation of the sticker. In an interview on the Show, she stated that she recorded the vocals of the song naked.

Lauper said she wanted little kids to think it was about dancing, and to understand the real meaning as they got older. She never directly stated in the song what the meaning of the song was, so it could receive airplay. The plan worked.Fact|date=July 2008

Lauper recorded a slow ballad version of the song for her album "".

") was a popular gay erotica magazine of the time, whereas the magazine Lauper holds represents the tamer—and somewhat closeted—erotica of an earlier era.

To date, 'She Bop' is Lauper's third-highest charting and third-most commercially successful single worldwide, after and Time After Time. It charted in the Top 50 in 16 countries (going Top 10 in 12 of them), including: #3 in the and #6 in and . Inexplicably, it was not a success in the , only climbing to #46.

* American indie band Francine recorded a cover of the song.
* Greek band Matisse covered the song for their 2007 album "".