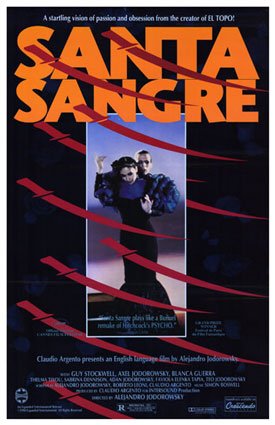 "Santa Sangre" is a 1989 Mexican-Italian directed by and written by , and Jodorowsky.

The film tells the story of a man named Fenix. It starts with a Jesus-like naked figure sitting in a tree in what looks like a mental asylum. Nurses come out to him, bringing a plate of conventional food and also one of bloody raw fish. As they try to coax him off of his perch, it is the fish that persuades him to come down. As the nurses get him to put on some overalls the viewer sees that he has a tattoo of an eagle on his chest.

The viewer learns that as a little boy Fenix grew up in a circus that was owned by his Father, Orgo, a tattoo covered, knife-throwing, strong but womanizing man. Fenix's best friend back in the circus was a girl who is both deaf and mute. She is a mime and is always shown in white face makeup. Fenix falls in love with the girl. Here the origin of the hawk tattoo is revealed. Orgo thinks that to initiate his son's journey into manhood he must have a tattoo, and ruthlessly carves the hawk onto his young son's chest.

Fenix's mother, named Concha, is a trapeze artist and aerialist who hangs herself above the ring suspended only by her hair. She is also a religious fanatic, leading a cult that worships an armless "saint" whose arms were chopped off by two brothers who attacked and then raped her. The blood of this saint is called Santa Sangre, literally meaning holy blood, and is stored in a pool in a church. This church, however, is about to be bulldozed by the authorities. Near the beginning of the film the church is shown being pulled down.

While Concha is suspended in mid-air, practicing one of her acts, she sees her husband sneak out with a tattooed woman, the guardian of the deaf mute. Concha, after first locking her son in a trailer, follows Orgo. She throws a corrosive liquid over him and the tatooed woman before he has time to retaliate. He, being a knife thrower, uses his weapons to hack off both her arms, then commits suicide, cutting his throat. Being locked in the trailer opposite, Fenix witnesses the whole scene, and sees the tattooed woman run off, taking the deaf mute girl with her.

Back in the present, Fenix for an unexplained reason believes he is a hawk (probably because of his tattoo - hence the raw fish and sitting in the tree). When he is on a field trip with the other patients, many of whom have , he spots the tattoo-covered woman, who is now a prostitute. He is consumed with rage over what happened to his mother and father because of this woman. His armless mother Concha persuades him to escape the asylum, and once out his arms are controlled by her mind. In a nightclub/theatre, they perform a joint act where Fenix puts her arms through Concha's sleeves, realistically portraying his arms as hers.

The next part of the film focuses on an orgy of bloody murders, starting with the skewering of the tattooed lady. Other victims include a cross-dressing wrestler, "the world's strongest woman," who in her act fights off dozens of male opponents. Concha does love her son, but she exercises a tyrannic level of control over him and is terrified of losing him to a woman, just as she lost her husband. When the deaf mute girl reappears, she orders Fenix to kill her. Fenix takes his place behind his mother and picks up two knives. However, he is unable to kill the love of his childhood, and he instead stabs his mother in the stomach. Concha staggers a few steps away, then looks back at her son and says: "You shall never get rid of me", before vanishing.

It is then revealed that Concha actually died when Orgo hacked her arms, and that Felix's experiences with her were hallucinations. The police arrive at the scene, and when they order them to put their hands up, Fenix stares ahead in shock, realizing that his hands are now under his control.

* One scene in the film shows a dead elephant and scavengers hacking apart its carcass. At the elephant's funeral it is placed in a huge coffin. It is paraded through the streets and then thrown down a rubbish tip, where it is immediately set upon by starving villagers, who break through the coffin and eat the flesh of the dead elephant.

* In the scene of the death of the tattooed woman, the attacker's face is never shown, although it is implied that the assailant is Concha, using Fenix's arms.

* The symbol of the Santa Sangre cult is in fact an image of two severed arms, one on top of the other, forming a diamond shape.

In the scene in the theatre, recreates, in part, French 's "Creation of the World", a retelling of the first two chapters of "" in mime. Both father and son Jodorowsky had worked with Marceau.