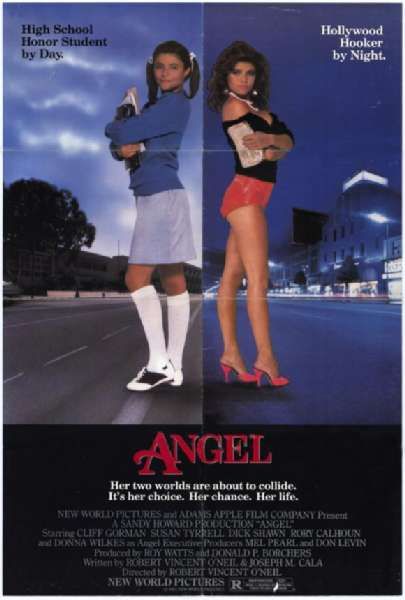 15 year old Molly Stuart () is an Honours student at an expensive private . Nobody suspects that the model pupil is secretly a named "Angel" at night, who works on after being abandoned by her parents. Her substitute family includes a , Mae (), a celebrity gun-slinging Kit Carson () and her foul-mouthed landlord, Solly (). For a while, she manages to support herself and keep her secret, but her two separate lives are shattered when some of Molly's school mates discover her working the streets one weekend, causing Molly to become a . Meanwhile, two of her prostitute friends become victims of a . As the only Angel becomes a target herself. The investigating detective, Andrews () is soon assigned to the case and takes Angel under his wing. Together they try to stop the insane killer from destroying what's left of Angel's life.

Taglines:
* "High School Honor Student by Day. Hollywood Hooker by Night."
* "Her two worlds are about to collide. It's her choice. Her chance. Her life."

Lead actress was actually 25 years old, when she played the role of 15 year old Molly Stuart in this film. She prepared for the role by talking to real-life street s on , and spent time with the Hollywood , and in various halfway houses for underage children living on the streets of .

Composer Craig Safan wrote the to this film in less than a week. The film premiered at the Pacific Hollywood Theatre on . A fact sheet inside the theatre confirms this. The theatre also features in the climax of the film , where a gun-toting Angel opens fire on the killer, terrifying patrons outside.

The motel in the film is the El Royale Motel at 11117 Venture Boulevard, . It has scarcely changed since this film was shot in 1983. In fact, most of the film was shot at real locations on and around .