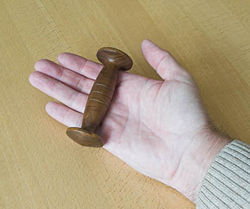 The yawara (also called pasak or dulodulo in Filipino martial arts) is a Japanese weapon used in various martial arts. It is also the specific weapon of Yawara-Jitsu.[1]

The Yawara originated from the use of Kongou, a Buddhist symbolic object, by various monks during Feudal Japan. The Yawara takes the form of one or two small, thick sticks which stick out about an inch from each side of the hand. They are usually used in pairs to initiate throws, bone breaks, and pressure point strikes.

The yawara stick was popularized for police officers in the 1940s by Professor Frank A. Matsuyama. Matsuyama also made his own lethal version in 1937 or earlier.[1][2]

In the United States, yawaras are not intrinsically illegal in every jurisdiction. In the United Kingdom, "any article made or adapted for use for causing injury to the person, or intended by the person having it with him for such use" is defined as an offensive weapon under the Prevention of Crime Act of 1953[3] thus potentially including a yawara stick.

Yawarajutsu is a martial art focusing on the yawara. It is sometimes simply referred to as yawara, and this name has been used interchangeably with jujutsu. There are similarities in the kanji for yawara (柔) and jujutsu (柔術). The yawari, tessen (iron fan), and short stick are used to apply yawara or jujutsu techniques. The yawara movements are believed to have been derived from the sheathed knife techniques of tantojutsu.