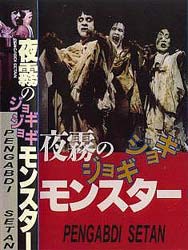 "Pengabdi Setan" is a 1982 n horror film directed by , the title translates into "Satan's Slave" which is also the name of the US DVD release. It is notable for being one of the few films to substitute Christian or Buddhist-based horror themes for Muslim beliefs. The film bears a resemblance in plot to 's 1979 film "Phantasm". It has achieved cult status among fans of Asian horror films; principally because it has been unavailable for many years except as an obscure Japanese VHS pressing with no English subtitles. In 2006, Brentwood Home Video, a specialist US label, released an uncut print on DVD for retail release as part of its Eastern Horror series.