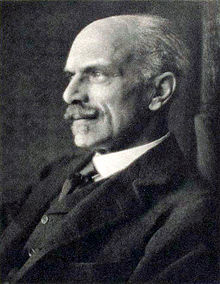 Maurice Henry Hewlett (1861–1923), was an English historical novelist, poet and essayist. He was born at Weybridge, the eldest son of Henry Gay Hewlett, of Shaw Hall, Addington, Kent. He was educated at the London International College, Spring Grove, Isleworth, and was called to the bar in 1891. He gave up the law after the success of Forest Lovers . From 1896 to 1901 he was Keeper of Lands, Revenues, Records and Enrolments, a government post as adviser on matters of medieval law.

Hewlett married Hilda Beatrice Herbert on 3 January 1888 in St. Peter's Church, Vauxhall, where her father was the incumbent vicar. The couple had two children, a daughter, Pia, and a son, Francis, but separated in 1914, partly due to Hilda's increasing interest in aviation. In 1911, Hilda had became the first woman in the UK to gain a pilot's licence.[1]

He settled at Broad Chalke, Wiltshire. His friends included Evelyn Underhill, and Ezra Pound, whom he met at the Poet's Club in London.

Maurice Hewlett was a friend of J. M. Barrie, who named one of the pirates in Peter Pan "Cecco" after Hewlett's son.

This list omits some significant works. He wrote six novels based on the Icelandic Family sagas, of which only The Light Heart and Thorgils of Treadholt are mentioned above. There is also The Outlaw (based on Gisli's Saga), A Lover's Tale (based on Kormak's Saga), Frey and His Wife (Ogmund Dytt's tale), and Gudred the Fair (based on the Greenland sagas).