Infobox_Film
name = Without a Paddle 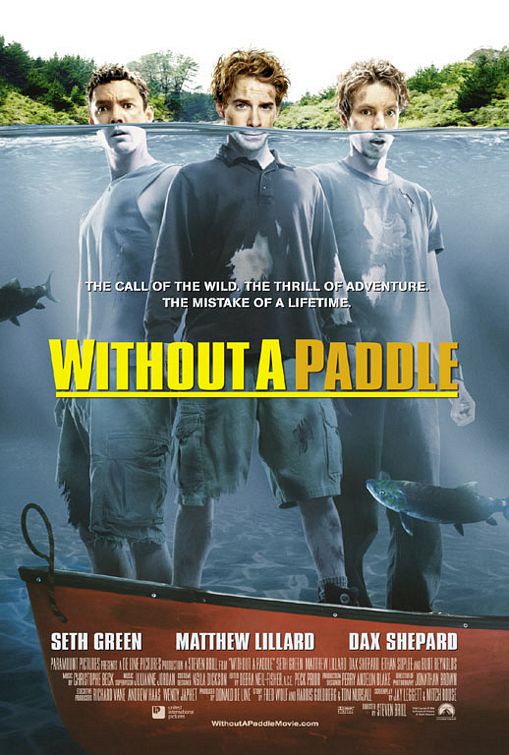 "Without a Paddle" is a 2004 about three men going on a camping trip. The movie stars , and . The film is somewhat a of adventure films like "" &mdash; indeed, one of the stars of "Deliverance", , makes an appearance in the film, and the plot lines are similar.

Although the the film details an ill-prepared camping and canoe trip into the Oregon wilds, "Without A Paddle" was filmed in New Zealand to take advantage of .

Ten years after graduating highschool, three friends, Jerry, Dan and Tom, find out that their other friend Billy died in from a accident. After the burial they take a trip down to memory lane and enter their where the four hung out when they were children. They find a map leading to 's lost treasure that Billy has been working on his whole life. Dan takes a break from his job as a doctor and joins Jerry and Tom on a trip to find the treasure. They meet a sheriff at the station who decides to help out for directions to the river.

They take a down the river and find Grandpa's Nose (a rock formation), and they stay on the riverside for the night. Standing around the , they discover they forgot to bring food and so Tom goes out for some to eat. He shines one fish but his friends fail to catch the . But the fish led a to come and it chases the group away, but Dan trips. The bear thinks Dan is its cub and it brings him back to its nest and fattens him up for . Dan manage to escape and they trio ends up sleeping in a tree. In the morning, they find all their gear ripped up and destroyed by the bear, even Dan's that the animal swallowed.

The trio takes off in the river but they take the wrong way because the bear ripped a hole in the map. The spilt leads them into s when they are nearly killed and drowned. The map is lost, and they end up falling off a but landing safely in a belly of water. Unfortunately, their canoe has been smashed to pieces. They take off in the woods with a and find themselves at a pot farm, in which the farmers mistake them for thiefs and start shooting at them. The guys escape into the farm but the security go off and hit the growth, causing a bunch of smoke to wallow around and get the trio stoned. With the farmers on their tail wear bandanas over their faces, the guys fall into a pond and use reeds to breath. Hiding in the pond, one of the farmers points his guns mistaking Dan in there as a but they take off. The guys then run into the woods, but in the morning the farmers find their crop burned and they set off to kill Jerry, Dan and Tom.

The guys meet two girls far into the forest. They are treated with food, communication, and . Using the , the farmers find them and attempt to cut down the tree in which the hippies live above. They drop paper bags full of at the farmers to distract them while the guys escape. Half naked, the guys are lost into the woods, while it is pouring rain. The only way they have to survive is to hold on to each other for warmth. They are caught by a man living up in the mountains and taken to his hut. The guy is named Del Knox, who was once D. B.'s parnter before his death. They are provided with clothes.

The next morning, the farmers find them and assault the house. The guys escape while Del Knox shoots at him with his . They guys find the site in which D. B. crashed landed. They find his along with the suitcase holding the money, but D. B. burned most of the money to survive. They then discover what the real treasure was for being alive. They then toss their valuable possessions on his body, including Dan's C-3PO action figure, Jerry's card, and Tom's . The only way out of the cave is for Dan to crawl through a small tunnel. The farmers find Jerry and Tom below and Dan comes from the ground and hits them with a log. The farmers fall down and they engage in a brawl. No one is defeated but the sheriff comes and the trio discover that the sheriff was working with the pot farmers all along. The three are cornered and Jerry, who took one of the farmers , flips off the pin but accidentally drops it. Moments before it blows he throws it towards the bad guys but they miss, and it explodes causing a tree to fall on the farmers and sheriff. The three bad guys are arrested afterwards.

In the end, Jerry, Dan, and Tom earn half of the money from D. B. Cooper's partner, Jerry proposes for his girlfriend, Dan starts a relationship with one of the hippie girls and gets laid for the first time, and Tom is a camp counsellor for a children's summer camp and tells his troop about the camp trip, but one of the campers asks "what's a downstairs?" and Tom drops his and glares at the camper, following the end credits stream.

Without a Paddle received many negative reviews from the critics. [http://www.rottentomatoes.com Rotten Tomatoes] currently states that only 14% of the reviews are positive.