The Strongest Man in the World

The Strongest Man in the World

Infobox Film
name = The Strongest Man in the World 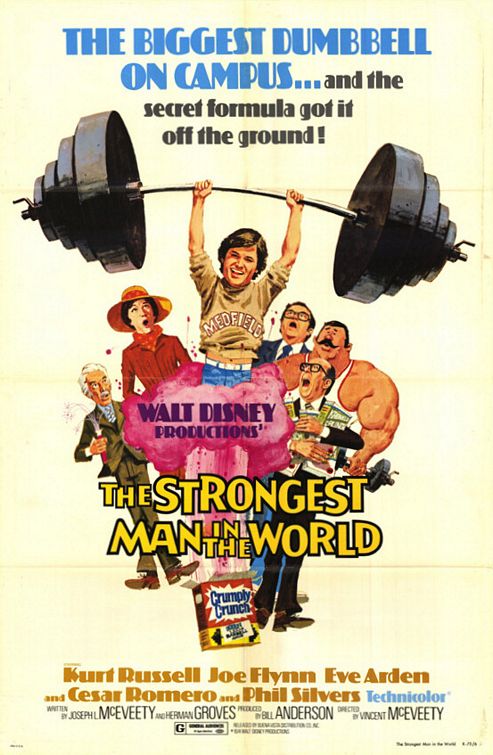 Medfield College's Dean Higgins is being fired for financial mismanagement because of extreme over-spending by Prof. Quigley's science class. Higgins finds out the high costs are for renting a cow to experiment on; they are feeding it various concoctions to make it fatter. In a rage, Higgins fires Quigley (yet again) then threatens to have his entire class thrown out of college. When the dean slams the door as he leaves, Dexter Riley's chemical experiment mixes with another student, Richard Schuyler's vitamin cereal mix.

When the cow eats some of the cereal that the mixture has leaked into, the students learn that the cereal gave the cow the ability to give a massively vast supply of milk, over 80 gallons! When Dexter eats it the next morning he gains , as does the frat house's pet dog who after eating some leftovers smashes down the door and chases after a that was growling at him. While walking to the college, Dexter accidentally bends a street lamp, then on the basketball court shatters the hoop.

Dexter shows the dean and Quigley his super-strength by picking up a fat kid in a chair with the right hand and Schuyler with the left. Amazed, Higgins jumps on this as an opportunity to get Medfield out of its financial slump and keep the from firing him. Higgins then takes the formula-laced cereal to the board of the Crumply Crunch cereal company. Higgins demonstrates this to the board and the president by eating some and lifting weights with one finger and smashing 10 foot long tables in half. They all decide to advertise the powers of the formula cereal by challenging Krinkle Krunch, a rival cereal company run by Krinkle (), to a competition between their sponsored team and Medfield's to see which cereal can give the other greater strength. Krinkle sponsors the well-funded State College.

Of course Krinkle has a mole on the inside who tells the Krinkle president about the formula. Hearing this he hires A.J. Arno () and some of his goons just released from prison to steal it. They break in but are almost caught before they can get it. So they then kidnap Schuyler (as no one knows that Dexter's chemical was the vital ingredient of the formula, rather than Schuyler's vitamins). They take him to Chinatown where they use Chinese torture and hypnotism to get the formula. They then hypnotise him to return home and not tell what happened to him. This accidentally causes him to steal a police car, leading to a car chase which gets him thrown in jail. Fortunately without Dexter's chemical added in, the formula Krinkle Krunch has in the cereal does not give super-strength; when the Krinkle president tries it he ends up breaking his hand. While he yells at the mole on the phone, the mole realizes that if they do not know that the formula does not work, then Medfield does not know either and will lose the weight-lifting competition.

So on the day of the contest, both teams eat their company's cereal then begin lifting large weights. With Krinkle's team full of large Herculean muscle builders and Medfield's team without super-strength, they will surely lose. Then Dexter realizes it was his formula that gave the cereal super-strength; he sets off to the lab to get it, taking the Dean's beautiful but slow vintage car. When he finally gets there he is confronted by Arno and ten of his goons. By drinking some of the formula Dexter, is able to beat up all the men, then use the Krinkle mole to strike A. J. Arno and his men down like bowling pins. He hears on the radio than he must return to the contest in four minutes or forfeit. He adds some formula to the car's petrol tank, which makes it race off at high speed, shedding parts as it goes. He makes it in time to compete last, but the car is a complete wreck, to the dean's horror.

Medfield is losing badly but Dexter uses the last of his super-strength to lift the 1101 pound weight and win it for Crumply Crunch and Medfield. So Higgins and Quigley get to keep their jobs, Arno is imprisoned yet again and the scheming Krinkle president breaks his hand again.