Christiania Theatre, or Kristiania Theatre, was Norway's finest stage for the spoken drama between October 4, 1836 (opening date) - September 1, 1899. It was located at Bankplassen by the Akershus Fortress in central Christiania, in Norway. It was the first lasting public theatre in Norway and the national stage of Norway and of Oslo during the 19th century.[1]

Christiania Theatre was the first long term public theatre in Oslo. Since the 18th century, there had been several attempts to start a public theatre in Oslo; between November 1771 to February 1772, public theatre was played by Norwegian traveling actors in the court house led by Martin Nürenbach an actor from the Swedish theatre troupe of Margareta Seuerling and her husband, but this did not last, and although Det Dramatiske Selskap (The Dramatic Club) performed plays in Gevaexthuset, a building used for concerts since the 1760s. From 1780, this was a private affair for the upper classes and not a public theatre. The first public theatre was instead to be the theatre of the Swedish theatre director, Johan Peter Strömberg, who opened in 1827, which was also to be the beginning of the Christiania Theatre. He was forced to hire educated Danish actors, became impopular when he performed a play about the Union between Sweden and Norway, and went bankrupt in 1828. The theatre was renamed Christiania Danish Theatre and several Danish actors were engaged. The first opera performed in public in Norway, Deux mots by French composer, Nicolas Dalayrac, was performed here in 1831 directed by August Schrumpf with Augusta Smith in the main role. After the building burnt down on 5 November 1835, it was reinstated with the name Christiania Theatre in 1837.[2] 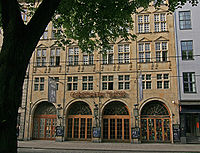 Over next few years an avid debate developed with strong criticism of the Danish dominancy of the arts. Christiania Theatre only employed Danish actors during its first history for which it was criticized. The reason given was that there was not an acting school in Norway and that the Norwegian actors were therefore not good enough. The Norwegian language conflict often centering around Norwegian writers who gradually adopted distinctly Norwegian vocabulary in their work. Henrik Wergeland may have been the first to do so. Art critic Johan Sebastian Welhaven was one of the conservatives who took out against the theories of the extreme nationalists. The Danish troupe was eventually mixed up with Norwegian actors after the employment of Norwegian actress and prima donna Laura Gundersen in 1849.

The foundation of the first Norwegian theatre in Oslo, Christiania Norwegian Theatre in 1852, was but a temporary rival, as it was forced to close down in 1862. The theatre was a result of the controversy surrounding the Norwegian and Danish languages and was created as a counterpoint to the Danish language dominated Christiania Theatre. Henrik Ibsen was artistic director of the Christiania Norwegian Theatre from the autumn of 1857 and served as the theatre leading director until its bankruptcy in 1862.[1]

From 1856, the Christiania Theatre promised to employ native actors. In 1872, Norwegian became the stage language. Ibsen's famous play Peer Gynt premiered here in 1876, as well as a large number of important Norwegian productions, including productions of Norway's other national bard at the time, Bjørnstjerne Bjørnson. During the continued run of Peer Gynt a fire started on the performing night of January 15, 1877 that heavily damaged the theatre, but luckily the theatre could later be repaired. Christiania Theatre was during its years in use seen as Norway's national stage for drama until the Nationaltheatret was opened on 1 September 1899, with Bjorn Bjornson as theatre director and a large part of the ensemble from the Christiania Theatre.