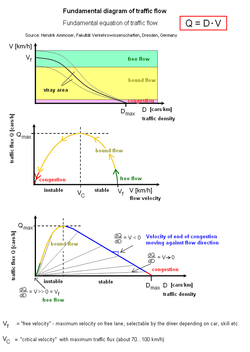 In the study of traffic flow theory, the flow-density diagram is used to determine the traffic state of a roadway. Currently, there are two types of flow density graphs. The first is the parabolic shaped flow-density curve, and the second is the triangular shaped flow density curve. Academia views the triangular shaped flow-density curve as more the accurate representation of real world events. The triangular shaped curve consists of two vectors. The first vector is the freeflow side of the curve. This vector is created by placing the freeflow velocity vector of a roadway at the origin of the flow-density graph. The second vector is the congested branch, which is created by placing the vector of the shock wave speed at zero flow and jam density. The congested branch has a negative slope, which implies that the higher the density on the congested branch the lower the flow; therefore, even though there are more cars on the road, the number of cars passing a single point is less than if there were fewer cars on the road. The intersection of freeflow and congested vectors is the apex of the curve and is considered the capacity of the roadway, which is the traffic condition at which the maximum number of vehicles can pass by a point in a given time period. The flow and capacity at which this point occurs is the optimum flow and optimum density, respectively. The flow density diagram is used to give the traffic condition of a roadway. With the traffic conditions, time-space diagrams can be created to give travel time, delay, and queue lengths of a road segment.

Speed flow diagrams are used to determine the speed at which the optimum flow occurs. There are currently two shapes of the speed-flow curve. The speed-flow curve also consists of two branches, the freeflow and congested branches. The diagram is not a function, allowing the flow variable to exist at two different speeds. The flow variable existing at two different speeds occurs when the speed is higher and the density is lower or when the speed is lower and the density is higher, which allows for the same flow rate. In the first speed-flow diagram, the freeflow branch is a horizontal line, which shows that the roadway is at freeflow speed until the optimum flow is reached. Once the optimum flow is reached, the diagram switches to the congested branch, which is a parabolic shape. The second speed flow diagram is a parabola. The parabola suggests that the only time there is freeflow speed is when the density approaches zero; it also suggests that as the flow increases the speed decreases. This parabolic graph also contains an optimum flow. The optimum also flow divides the freeflow and congested branches on the parabolic graph.