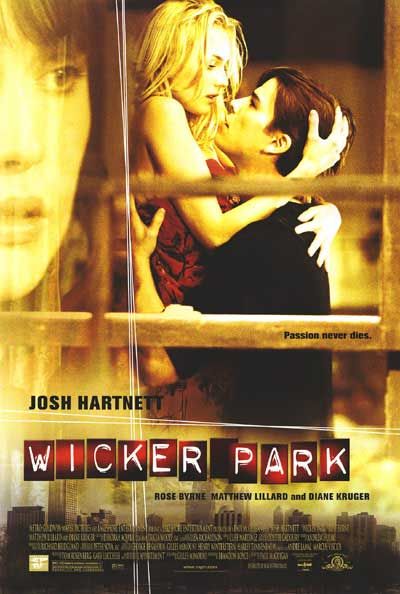 
"Wicker Park" is a 2004 romantic directed by Paul McGuigan. The movie is a remake of the French movie "". It was nominated for the at the , the city in which the movie was partially filmed.

Moving back and forth in time and revealing the story from each character's perspective, Wicker Park is a psychological drama about a man, Matt (), caught in an obsessive search for a woman he fell deeply in love with, Lisa (), who then vanished without a trace. Two years after her disappearance, he catches a fleeting glimpse of her in a local bar and begins a twisting search to find her and discover what really happened.

At first the protagonist, Matt, is portrayed as a stalker, who is obsessed with Lisa and is probably mentally ill. He follows her and enters both her apartment and hotel room. As details are revealed regarding their former relationship through a series of dreams and flashbacks, the plot begins to thicken as Matt is portrayed in a more sympathetic light. Indeed, after an encounter with a woman that initially leads the audience to believe that Matt is hallucinating, it is revealed that Matt's obsession may not be completely irrational and that he is indeed the subject of a twisted plot by his own obsessive stalker ().

*Although the movie is called "Wicker Park" and set in the Wicker Park neighborhood of Chicago, most of the movie was filmed in .
* was set to star in the film but pulled out due to filming conflicts with "".
*, also known for his work on Solaris, wrote the film's score.
*Both and starred in another 2004 film together, "Troy".
* The restaurant where Matthew overhears Lisa talking on the telephone is called "Bellucci". was the female lead in the French original "" (1996), of which this film is a remake.
*When Lisa () tells Matthew () that her shoe size is 8½, Matthew responds, "Like Fellini." in reference to 's famous movie "". The film itself is similar to "8½" in its use of non-linear narrative.
*Is the second film where Rose Byrne plays a character named Alex. The other film was .

Josh Hartnett plays Matthew Simon. Matt works as a prominent photographer, with his girlfriend Rebecca's brother. He became interested in photography at the age 8 while looking at pictures of tropical fish in library books. Matthew is good friends with Luke (Matthew Lillard). Matthew Simon is the lead character who is gets tangled up with three different women. At the start of the movie he is involved with Rebecca (Jessica Pare) and works for her brother, but he is still in love with Lisa (Diane Kruger). Along the way he gets caught up with Alex (Rose Byrne).

Matthew Lillard plays Luke. Luke works at Lady Dragon Shoes and lives in the apartment above the store. He always talks like he is very popular with the ladies, but it is never shown. He drives a classic muscle car and is currently dating an actor. Matthew Simon is his good friend, whom he lets stay at his place.

Rose Byrne plays Alex. Alex works as an actress, but she tells people that she is a nurse. Whether or not she really is a nurse is unconfirmed. Alex is an observer and is how she gets to know Matt, Lisa, and Luke. She likes Matt but was too shy to approach him at first. Lisa was her neighbor and she is currently dating Luke.

Diane Kruger plays Lisa. Lisa is a dancer and rehearses at the Chicago Dance Academy. Currently her parents are separated with her mother in Prague and her father in California. She has just broken up with her boyfriend Daniel at her request.