MilSim is an abbreviation of Military Simulation, and refers to military simulations conducted by civilians for entertainment purposes. There are several forms of MilSim: airsoft games, paintball games, and video games simulating military scenarios and tactics.

However, in real-world military and law enforcement training environments, paintball equipment is favored almost exclusively over airsoft counterparts. Primary factors for the use of paintball equipment includes the realistic audible report, the ease of use and reliability of paintball guns and clear marking of impacts when a target is struck. Modern paintball guns, especially those which are designed with milsim in mind, are capable of supporting the full range of tactical upgrades using standard weaver sight rails and RIS rails which accommodate everything from foregrips to tactical flashlights.

MilSim most often falls into two different categories: reenactment and simulation. Reenactments focus on a particular event in history and aim to provide the most accurate representation of the time period, events and outcomes of the historical event. Simulation however may only focus on a particular time period and representation of which course a particular situation may have taken in history. In most cases a simulation event includes fictitious characters, groups and political situations.[2] 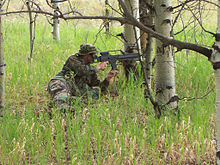 A player with an airsoft G36E takes aim during a game
Main article: Airsoft

Airsoft is a sport in which individuals participate in the simulation of military combat also called MilSim or law enforcement-style combat.

Some Airsoft Teams specialize in Milsim and historical reenactment intended to get the participant "inside the head" of the characters from history. This is an immersive experience and gives participants a chance to live recent history. Many airsoft groups have ex-military members seeking the camaraderie of their old units without the commitment. Some groups support military charities as part of their mission.

Airsoft has its roots in late-1980s East Asia, specifically Japan where firearms were difficult or impossible to obtain due to local laws, so people sought a legal alternative for enjoying their passion. Airsoft is still today most popular in several Asian regions, such as Japan, China, Taiwan, Hong Kong, Macau, South Korea, and to a certain extent, the Philippines, and Indonesia. The vast majority of airsoft guns, accessories and after market upgrade parts are also manufactured in these countries.

The United Kingdom's MilSim scene includes a number of airsoft event organizer's who specialize in MilSim events run in conjunction with Live Action Role-Players (see LARP) at British Army training facilities such as Copehill Down and Catterick Garrison.

Paintball is a sport in which participants eliminate opponents from play by hitting them with paintballs, spherical gelatin capsules containing primarily polyethylene glycol, other non-toxic and water-soluble substances, and dye, shot from a compressed-gas-powered gun, commonly called a marker.

Paintball draws a wide array of players, and the Sporting Goods Manufacturer's Association estimates that over 30 million people play annually in the United States alone. Insurance statistics show that paintball is one of the safest sports in existence, even more so than tennis.[3]

Games can be played either indoors or outdoors and take various forms, of which some of the most popular are woodsball, scenario and speedball, also sometimes known as tourneyball under various circumstances. Rules for playing paintball vary widely, with most designed to ensure that participants enjoy the sport in a safe environment. The sport requires a significant amount of equipment and has even developed its own slang.

A game of paintball usually involves two opposing teams seeking to eliminate all of the other team's players or to complete an objective, such as retrieving a flag, eliminating a specific player, or other paintball variations. An average, non-professional game of paintball usually lasts around five minutes to half an hour. Since its inception, paintball has drawn a crowd of both casual and serious players.