This article is about the architectural or sculptural model. For the Italian animator, please see Bruno Bozzetto. 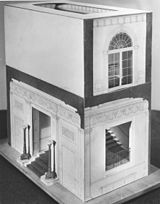 A maquette by architect Lorenzo Winslow exploring the structure of the Grand Staircase at the White House.

A maquette (French word for scale model, sometimes referred to by the Italian names plastico or modello) is a small scale model or rough draft of an unfinished architectural work or a sculpture. An equivalent term is bozzetto, from the Italian word that means "sketch".

It is used to visualize and test shapes and ideas without incurring the cost and effort of producing a full scale product. It is the analogue of the painter's cartoon, modello, oil sketch or drawn sketch. For commissioned sculptures, especially monumental public sculptures, a maquette may be used to show the client how the finished work will fit in the proposed site. The term may also refer to a prototype for a video game, film, or any other type of media. Modello, unlike the other terms, is also used for sketches for two-dimensional works such as paintings. 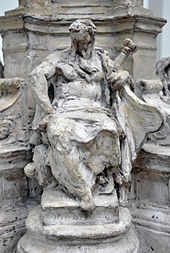 Jean-Baptiste Carpeaux' maquette for the fountain he donated to Valenciennes

Like oil sketches, these works in progress can be at least as much sought after as completed works by highly regarded artists, showing the process of developing an idea. Gian Lorenzo Bernini, a sculptor from the Baroque period, made his bozzetti from wax or baked terracotta to show his patrons how the final piece was intended to look. Eleven of these bozzetti were displayed in an exhibition at the Art Institute of Chicago in 2004.[1] Some museums specialise in collections of maquettes, such as the Museo dei Bozzetti in Pietrasanta, Italy.