Other Voices, Inc. is a non-profit literary press encompassing Other Voices literary magazine and the fiction imprint OV Books. 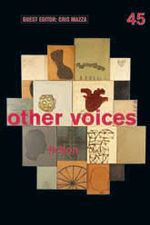 Established in 1984, Other Voices is a "fiction-focused magazine ... dedicated to publishing diverse, original short stories by authors ranging from literary bestsellers to cutting-edge experimentalists," [1] as well as interviews with fiction writers and reviews of contemporary fiction.

In collaboration with the University of Illinois Press, OV Books has published Simplify by Tod Goldberg and O Street by Corrina Wycoff.