White of the Eye (film)

White of the Eye (film) 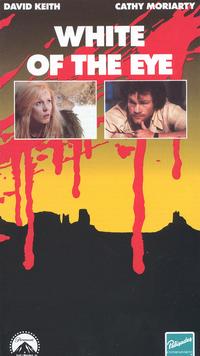 "White Of The Eye" is a 1987 British thriller film directed by . It was adapted in film by Donald Cammell and his wife from the novel "Mrs. White", written by Andrew and Laurence Klavan.

Paul White is a sound expert instaling hi-fi systems in wealthy people's homes. He is married to Joan, whom he has seduced away from Mike DeSantos ten years before. DeSantos is a serial killer who tries to frame Paul for his murders. Joan, although in doubt herself, tries to help her husband against the suspicions of detective Charles Mendoza.

Based on the 1983 novel 'Mrs White' by Margaret Tracy (pseudonym of the brothers Andrew and Lawrence Klavan) part of the plot is a remake of 's and also has some visual quotes from Meyer's Up!.