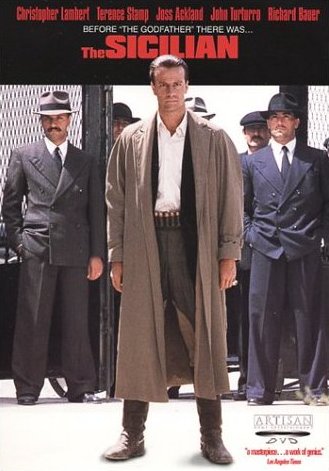 "The Sicilian" is a 1987 action film based on the novel of the same name by , directed by and starring and .

Tagline: "Only one man ever tried to stand alone"

Patriot and real-life Robin Hood , the infamous bandit who, together with his rag-tag band of guerrillas, attempted to liberate early 1950s Sicily from Italian rule and make it an American state. Giuliano robs from the rich conservative landowners to give to the poor, servant-like peasants, who in turn hail him as their savior. As his popularity grows, so does his ego, and he eventually thinks he is above the power of his backer, Mafia Don Masino Croce. The Don, in turn, sets out to kill the upstart by convincing his cousin and closest adviser Gaspare to assassinate him.

Cimino sued the producers of the film in an attempt to prevent them from releasing an edited and shortened version of it to theatres, though the suit failed.

Critical reaction to the film was mixed to negative. It holds a rating of 13% on , based on eight reviews [ [http://www.rottentomatoes.com/m/sicilian/ Reviews] , Rotten Tomatoes] . of said, "Cimino's fondness for amber lighting and great, sweeping camera movements are evident from time to time, but the film is mostly a garbled of the Puzo novel." of the praised Cimino's direction, but felt the film was "dark, gloomy, brooding, and completely confusing." [ [http://rogerebert.suntimes.com/apps/pbcs.dll/article?AID=/19871023/REVIEWS/710230303/1023 Review] , Roger Ebert, Chicago Sun-Times, October 23, 1987] Hal Hinson of the felt it was "unambiguously atrocious, but in that very special, howlingly grandiose manner that only a filmmaker with visions of epic greatness working on a large scale with a multinational cast can achieve." [ [http://www.washingtonpost.com/wp-srv/style/longterm/movies/videos/thesicilianrhinson_a0c92d.htm Review] , Hal Hinson, Washington Post, October 24, 1987]

* as
* as Prince Borsa
* as Don Masino Croce
* as Pisciotta
* as Camilla, Duchess of Crotone

The novel is a spin-off of "" (set during Michael's exile in Sicily), however, all references to the Corleones are omitted from the film due to copyright issues.

Originally released at 115 minutes in the USA. A 146-minute is available on video and at least in Europe as a region 2 DVD.