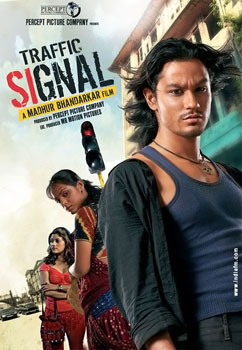 
"Traffic Signal" is a film directed by .It stars , and .Bhandarkar won in as Best Director for this film, also won, Anil Moti Ram Palande, the first

This film is about the lives and travails of people living around a fictitious traffic signal in Mumbai.

Anybody who drives in Mumbai has experienced the 2-odd minute wait at a traffic signal. But do you know that you contribute to the economy at that signal?

The traffic signal includes a microcosm of people who derive their daily livelihoods from it. There are beggars (kids and adults), prostitutes, tricksters, eunuchs and others who sell clothes, flowers and trinkets. They speak quickly, act fast and operate somewhat honorably (with each other) to eke a meager living out of the harsh Bombay street life. They owe allegiance and "hafta" (weekly &quot;protection&quot; fee) to the Signal Manager, Silsila ().

Silsila grew up at the signal. He ran various trades at the signal before he became the Manager. He is an ideal manager: sensitive and caring of his workers yet ruthless when it comes to delivery. Silsila reports into a mid-level don, Jaffar, who in turn reports to the big boss Haji bhaijaan.

Life is well at the signal. A gentle young girl, Rani (), arrives at the signal to sell ethnic clothes. The initial fireworks blossom into deeper companionship with Silsila. Everything proceeds normally.

Unbeknownst to Silsila, Haji bhaijaan is part of a larger nexus of evil that comprises politicians and the larger Mafia. Haji is forced to play a dangerous game where he is forced to invoke the unwitting pawn, Silsila, to start a series of events that could ultimately destroy the traffic signal. Silsila is blissfully unaware of the larger consequences as he carries out his orders without question. But reality dawns on him when he is apprehended in a case of murder, extortion and bribery where he was hardly aware of things.

The signal faces destruction. Silsila's world, and all the people who grew up with it, face extinction. Silsila is forced to make a choice between his life and his world. As his life moves from Green to Red, he may only hope that the signal moves from Red to Green.

The street lingo, Bambaiya, is captured in the movie. It provides a real, grounded and straight-to-the-bone thematic element that projects the lives of the denizens and the circumstances that affect them.

*This movie is the last part of 's after "Page 3" (2005)and "Corporate" (2006) [ [http://imsports.rediff.com/movies/2007/jan/31madhur.htm Madhur Bhandarkar on Traffic ] ]
* acting is critically acclaimed and she got very good reviews for her role. Reviews state that is able to bring a shred of credibility to her part in this movie. [ [http://www.ibnlive.com/news/masands-verdict-traffic-signal/32637-8-1.html Masand's Verdict: Traffic Signal ] ]