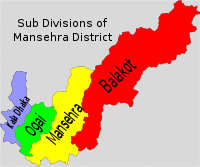 Oghi Tehsil is a sub-district (Tehsil) of Mansehra District in the Khyber Pakhtoonkhwa province of Pakistan. The Tehsil takes its name from the main city of the area, Oghi.

KOTLA is one of the main village of this union counsil which consists of 60 houses and about 1000 population. Majority of peoples are SWATIES. MOLVI GHULAM RABBANI is the first citizen of this village. The new generation is very fast here. GULNAWAZ, SAJJAD, SIDDIQUE, RASHID, ISRAR, SAGHEER, M KASHIF SHAD SWATI, etc. are well known personalities here.

Most of the area is arid or barani (rain fed) and about 25% of the people are involved in the agricultural sector. People have to rely on a good rainy season for a high-quality crop yield. The region is also devoid of natural gas, and people use timber as source of fuel for cooking and other purposes.

The town of Oghi is the market centre of the area, and is located in the western part of the tehsil. The original name of Oghi is AGROR Valley, but because the town Oghi is so close to the city centre the whole area is now known as Oghi. The largest towns of the Oghi Tehsil are:

Following are the big surrounding towns of Oghi.

DHARRA VILLAGE is located 3.5 km from Oghi bazar it have 3 Madrasa's and have 2 primary school 1 for girls and 1 for boys.

The most beautiful valley among the greeny hills. It is top of the most of the villages.

It is a beautiful village having population of 3000 persons & the local mother tongue is HINDKO. Agriculture is the main source of income. Malik Jehangir, Muhammad Latif are the key Personalities serving the Pakistani Nation in the field of Education.

It Is the Village of Akhund khel ( Yusufzai ), They are well known for still following their Pakhtoon culture.Other leading tribes are Tanoli,Hassan Zai,Engar,Qazi,and Gujar. People of Manchora are very simple and straight forward.The village have the well known celebrities like engr Tofeeq (retired from radio Pakistan on 19 scale),Major Saleem ,Dr.Badshah Gul.

Popular rivers Unnar,Sheen Dand (Alakano Dand)and Nava Dand is also passing through land of Manchora. Government Degree Collage Oghi is also in the Land of Manchora. Manchora a Hindko Word, MAN stand for Heart (ZRA) and Chora Stand for Thieves (ghala), mean the thieve of Hearts (Da Zarnoo Ghal). Village Mnachora is linked with Rasheeda in East,Shahcoat in North,Beliean in West and Hafizabad in South.There is ptcl exchange in Machora.The WAPDA power station is also deviced in Manchora which measure the climate of whole tehsil.The education situation is not so good as compare to the other villages but still young generation of the village have good moral attitudes as compare to the native of other villages.

Dehran is one of the most beautiful villages of the valley. Most of the people of the village are well educated. This beauiful village is surrounded by small brooks full of green trees and singing birds. Here is water problem,Only TANOLI's lives there.

Rashida is in the north of oghi fort, belongs to Azizwani, Awan, tanoli, etc. oghi fort build in 1867, school, civil hospital and digree college are in the vicinity of village. Because of location of high school Oghi in Rashida village most of the people are well educated and professional. i.e doctors, engineers, civil services, Pak army, Pakistan airforce fighter pilots, Pakistan navy and buisness etc, serving all over the country as well as all over the world.

Bajna is the most educated village of the tehsil Oghi.

Chulandrian is the one of best beautiful place in the oghi region. People of the chulandrian are very kind hearted and well educated. The village become surrounded among the thick forest.

Ghanian is the most popular and the largest village of agror valley....it is near to dilborii its population is nearly 5000 pashto.

The Village Dilbori is at the corner of Tehsil Oghi. This is also the capital of Unoin Council Dilbori. The village is famous for its fertile land and hard working people. Situated on Main Batagram Road, North of Oghi. The Population Of Dilbori is about to 6000. There is a High School, Hospital for first aid, Post Office, Bank, WAPDA Complaint office and A Big School of Islamic Literature (MADRASSA), Private schools and a small Market etc. The literacy rate of this small village is about 70%. Jadoon Qoam, KhanKhail & Syed are in majority, and holed the village completely. 50% of this village are related to Agriculture, and cultivate Maize, Wheat, Rice and Vegetables, About 30% have Government jobs and else are related to private sector or have their own business.

This is a small village on the boundary of District Mansehra & Battagram in Dilbori union council. This village has a mosque School for basic education. For higher education children to big cities all over the country. Electricity has been provided to the village recently. A number of tribes i.e. Akazais, Akhun Khels, Bangashs and Swati resides in this small village since the past century. The people of this village are very hard working. It has produced over a dozen Military and civil service officers including a Colonel and PhD professor.

A Beautiful Village In the Valley of Agrore.....it is located in the center of agror valley. Basically kolika is the village of Awan family , some other families like Swati,Gujjar and Pathan also living in kolika village. kolika is a heaven if any one know that........... Live Like A Lion.

This village has a literacy rate near about 90%; most people belong to education department and tabligh and also they are famous because of agriculture and village its name Gali Badral, i.e. Street of Badral. Similar to Kanshian, the main rain-fed crops of the area are maize (kharif), and wheat (rabi). Pears and apples are also cultivated. There is thin forest cover above the main hamlet of the village. People use drinking water from springs and indoor taps. Pipe gas is not available however most of the households have electricity supply. Gali Badral is linked to Oghi City through a metalled road, one way is about 35 minutes. There is one primary school for girls and one primary and a high school for boys. Apart from these, a private English medium school with co-education is located in the village. Also in Gali Badral, the inhabitants’ main sources of cash income are remittances and non-farm labour. Other remunerated activities include dairy farming, salaried jobs, and trading.

Maloga is the third largest town of Oghi tehsil, with a population of over 1,000 families. It is in the southern part of the tehsil. It has two mosques, two government-funded primary schools, several private educational institutions and two Madrasahs, of which one is for girls.Mohsin Naeem, Zaheer Ahmed, Hamza khan are most popular persons of this village..

Historically Maloga was a destination for people of different ethnic backgrounds, and it still has a large proportion of people of multi-ethnic background. Tribes of Maloga include tanoli, Keninth, Qureshis, Munshis(yousef zai), Swatis and a small population other costs.

Shergarh is one of the Union Councils of the Tehsil Oghi. It plays an important role in area politics. It was the summer capital of the princely State of Amb.

Shergarh is also the Historical place. It presents a lot of the historical events and traditions that have passed away. Before the partition of the subcontinent, both Hindus and Muslims were living with each other and after partition the Hindus migrated to India. There one can also see the influence of the Hindus traditions and culture. 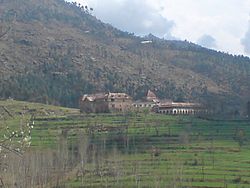 Shergarh also has a Basic Health Unit; catering for the basic medical needs of the locality.

Bajna Bajna is located approximately 3.5 kilometers on Oghi Darband Road from the main bazaar of Oghi. A scenic location and beautiful mountainous landscape attributes to the strong hospitable character of the people of this area. Village Bajna is one of the most educated villages of Tehsil Oghi. Many renowned Professionals like Doctors, Engineers, Lawyers, Forest officers and Geologists hail from village Bajna, thereby providing a leading example for the populace of the area. Amongst the prominent families of this region are the Samadyans, notable elders of the family are Qazi Mushtaq Ahmad retired Bank manager,Justice (R) Muhammad Raza Khan, Former Chief Justice of Peshawar High Court, Col (R) Dr.Nazir Ahmad Qazi Dr.aziz qazi(Nescom),professor Ashfaq ahmed F.G college of commerce H-8/4 Islamabad ,Qazi Waqar Ahmed (Geologist at Halliburten oman),Qazi Tanveer Ahmed chemical engineer(FFC)

Kangarh is a strategically important village of the Tanaval Valley. It is usually known as Kangarh Mera, Mera being the twin village just opposite to Kangarh. It is a strategic location as it lies in the juncture from where the main road from Oghi divides into two, one going to Darband while the other to Krori. Inhabitants of the village are Pakhtun warriors belonging to the Akazai Clan of the Yousufzai tribe. The Akazais were active in fighting against the British. The inhabitants of current day Kangarh are originally from Tor Ghar (Black Mountain).

Arbora is one of the largest towns of Oghi tehsil, with a population of over 500 families. It is in the southern part of the tehsil. It has two mosques, one government middle school, two government funded primary schools, one private educational institution and one Madrasahs.

Rashida is a village of tehsil Oghi. It is one km from main bazaar at Batgram road. It consists of nearly 500 families. Government high school was built in 1957. F C cheak post is also very close to village Rashida.

Bazar gai bazargai is the beautiful village of the oghi located near the mountain and small river around it increase beauty of the village there are different family living in bazargai before Pakistan independence i.e. Awan, pathan shiekh, babu or rajput families

Seri village is a remote village of Oghi tehsil. The major language spoken here is Pashto. It consists of various families, like Akazai, Hasanzai, Chagharzai and Gujjar. The Akazai branch of Yousafzai tribe (Tasan Khel and Barat Khel) hold onto the village. There are two primary schools in the village. Due to the lack of good Educational Institutes, business activities and job opportunities many of the families belonging to the Akazai tribe have left the village and are residing in other parts of country.

In the village, all basic needs of the life are available such as two primary schools for boys and girls. HOZRA, a public place is using for social purposes.

UC Karori having pivotal position in Upper Tanawal (tehsil Oghi), best forest of the Hazara region are situated in that UC.