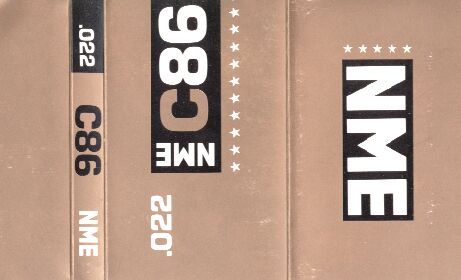 C86 is a cassette compilation released by the British music magazine "New Musical Express" (NME) in 1986, featuring new bands licensed from independent labels of the time. As a phrase, C86 quickly evolved into shorthand for a guitar-based musical genre characterised by "jangly" guitars and fey melodies, although other musical styles were represented on the tape. Inspired by the ideals of punk, it evolved into one of the most derided UK music genres in the last thirty years. [ Cajun Dance Party, The Colourful Life, The Observer, http://music.guardian.co.uk/pop/reviews/story/0,,2273973,00.html] It became a term of abuse for its associations with ness and underachievement, although some now argue that its release represents a pivotal moment for independent music in the UK. [Stanley, Bob Sleevenotes to CD86]

The tape was a belated follow-up to C81, a more diverse collection of new bands, released by the "NME" in in conjunction with Rough Trade. C86 was similarly designed to reflect the new music scene of the time. It was compiled by NME writers , Neil Taylor and , who licenced tracks from labels such as Creation, Pink, and Ron Johnson. Readers had to pay for the tape via mail order although an LP was subsequently released on Rough Trade in 1987. The UK music press, in this period, was extremely competitive, with four weekly papers documenting new bands and trends. There was a tendency to artificially create and "discover" new musical sub-genres in order to heighten reader interest. NME journalists of the period now agree that C86 was a typical example of this, but also a byproduct of NME's "hip hop wars"; [ NME: Still Rocking at 50, BBC News, http://news.bbc.co.uk/1/hi/entertainment/music/1836411.stm] a schism on the paper (and amongst readers) between enthusiasts of the contemporary progressive black music such as Public Enemy and , and the fans of traditional white rock, which was the superabundant genre represented on C86.

It was the 23rd NME tape, although its catalogue number was NME022 (C81 had been dubbed COPY001). The rest of the tapes were compilations promoting labels' back catalogues and dedicated to R&B, , or . C86 was followed up with a compilation, "Holiday Romance". [ I Love Everything Forum http://ilx.p3r.net/thread.php?msgid=2077178]

The C86 line-up featured early tracks from , , Stump, Big Flame and . Their loud quirkiness was completely at odds with the -style guitars and fey melodies of what came to be known as C86 bands. NME promoted the tape it in conjunction with London's , who staged [http://www.indie-mp3.co.uk/2006/01/c86-review-of-c86-week.html a week of gigs] in July which featured most of the acts on the compilation.

"beginning of indie music...It's hard to remember how underground guitar music and fanzines were in the mid 80s; ethics and any residual punk attitudes were in isolated pockets around the country and the C86 comp and gigs brought them together in an explosion of new groups".

Martin Whitehead, who ran the Subway label in the late 80s, was of this view [ Hann, Michael "Fey City Rollers" http://arts.guardian.co.uk/features/story/0,11710,1325674,00.html] believing it to have had a political influence. "Before C86, women could only be eye-candy in a band, I think C86 changed that - there were women promoting gigs, writing fanzines and running labels".

Some writers however regret the influence the tape had over the music scene of the time and subsequently. , a writer for NME in 1986 under the name "The Legend!" [Everett True, Plan B blog http://planbmag.com/blogs/staff/2005/07/22/friday-22-july/] called it "unrepresentative of its times (as opposed to the brilliant C81 comp) and even unrepresentative of the small narrow strata of music it thought it was representing." Alastair Fitchett, editor of the long-running music site Tangents goes further, despite being a fan of many of the bands on the tape. [ Alastair Fitchett, C86, Tangents, http://www.tangents.co.uk/tangents/main/2002/nov/c86.html ]

'"(The NME) laid the foundations for the desolate wastelands of what we came to know by that vile term 'Indie'. What more reason do you need to hate it?"'

In 1996 NME continued the tradition of compiling a new band album (this time a CD) by releasing C96. This had little impact and has been almost forgotten. [Tim Footman, Tangents blog, 2002, http://www.tangents.co.uk/tangents/main/2002/dec/c96.html ]

The 20th anniversary of the tape, in 2006, saw several tributes. A download-only compilation, [http://www.indie-mp3.co.uk/2006/07/c06.html C06] , of contemporary bands inspired by those on the original C86 cassette was put together by the indie-mp3 site in July 2006. Adouble-CD compilation; "CD86", [ Press Release, CD86 Myspace Profile, http://www.myspace.com/cd86sanctuaryrecords ] compiled by Bob Stanley, was released by and the ICA hosted "C86 - Still Doing It For Fun", [ ICA website, C86 - Still Doing It For Fun, October 2006, http://www.ica.org.uk/?lid=12257 ] an exhibition and 2 nights of gigs celebrating the rise of British Independent music.

The full tracklisting for the C86 compilation was: