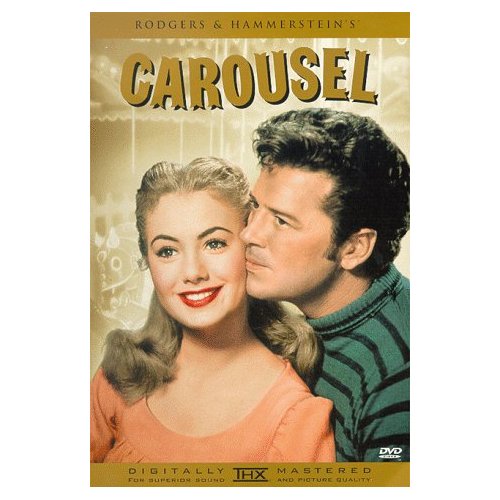 "Carousel" is a 1956 film adaptation of the 1945 musical of the same name which was based on 's "". The movie stars and , and was directed by . Like the original stage production, the film contains what many critics consider some of Rodgers and Hammerstein's most beautiful songs, as well as what may be, along with "South Pacific", the most serious storyline found in their musicals.

The film was made in , and in color by DeLuxe. It was, however, ultimately shown in regular 35mm CinemaScope rather than the 55mm version of the process, although the original premiere did feature a 6-track magnetic stereo soundtrack specially devised for CinemaScope 55. It was played on a separate machine synchronized with the picture. Most of the other prints of the film used the standard 4-track stereo soundtrack featured on regular CinemaScope films ca. 1953-1957.

The story revolves around Billy Bigelow, a rough-talking, macho, handsome carousel barker, and Julie Jordan, a young, innocent mill worker. They fall in love, but both are fired from their jobs for different reasons - Billy because he paid too much attention to Julie, and Julie because she stayed out past her curfew. The two marry and go to live at the seaside of her cousin Nettie, but Billy becomes bitter because he is unable to find work, and in his frustration, strikes Julie (this moment is not shown at all in the film). Mrs. Mullin, the jealous carousel owner who is infatuated with him, goes to Nettie's and offers Billy his old job back, but will not re-hire him unless he leaves his wife. When Julie becomes pregnant, Billy is overjoyed, but, worried about not being able to provide for his child, secretly agrees to join his no-good pal Jigger Craigin in a robbery. During a clambake that night, the two men sneak away. The robbery is unsuccessful and Jigger escapes, but Billy is accidentally killed. Fifteen years later, in the other world (apparently the back door of Heaven), he is told that he can return to Earth for one day to make amends. Billy returns to find his daughter Louise emotionally scarred because she is constantly taunted over the fact that her father tried to commit a robbery. Billy, not telling her who he is, makes himself visible, tries to cheer her up, and gives her a star that he stole from Heaven. Louise refuses it, frightened, and Billy, in desperation, slaps her hand. She rushes inside the house and informs Julie of what happened, saying that she did not feel a slap, but a kiss. Billy tries to make himself invisible before Julie can see him, but she has glimpsed him for just a split second, and senses that he has come back for a reason. Billy asks his Heavenly Guide for permission to go to Louise's high school graduation, and there he silently gives both her and Julie the confidence they need and the knowledge that, in spite of everything, he loved Julie.

The film followed the stage version faithfully, except for four major changes:

*In the film, Billy dies by accident, rather than by suicide as in the show — when he falls on his own knife while trying to escape arrest.
*The "" singing in the "bench scene", leading directly into the song "If I Loved You", is turned into spoken dialogue.
*The "recitative" singing that leads directly into the song "June Is Bustin' Out All Over" is eliminated.
*The film begins in 1888 with Billy having been dead for fifteen years, and the story of his life on Earth is made into a flashback that takes up three-quarters of the film. Billy tells his own story to the Starkeeper in order to receive permission to return to Earth for one day. This last change was made to safeguard against the movie audience's being surprised at the death of Billy, and to prevent their leaving directly after it happens lest they think the story ended at that point.

A smaller, less important change was the switching of the song "When The Children Are Asleep" to a later moment in order to take full advantage of the Maine locale. In the film, it is sung in a new scene by Carrie and Mr. Snow in their boat as the couple, together with Julie and Billy, sail to the island for the clambake. (This would logically place the song between Acts I and II of the stage version.) In the stage version, the song is unheard by any of the other characters, but the film places it so that Julie and Billy are there to listen to the song, and to lend a sharp contrast to the happiness that Mr. Snow feels in comparison to Billy's obvious uneasiness about the robbery that he and Jigger are soon to commit.)

Response to the film

The world premiere of the film, in New York City, was attended by Washington diplomats as well as film stars. Among those in the audience were and . Muskie was at that time the governor of , where a large part of the movie was filmed. (Locations such as and Camden were used.) The film was largely critically acclaimed, but was a box office flop. Its soundtrack album, however, sold well, and the film's exposure on television, VHS, and DVD, has won a larger audience for it. It was one of two Rodgers and Hammerstein films not nominated for any (the 1962 "State Fair" , an unsuccessful remake of R&H's hit musical written especially for film, received no nominations either, but, unlike "Carousel", it is almost universally reviled by critics - even gives it a "BOMB" rating in his Movie Guide).

However, some of the technical staff of "Carousel" also worked on the film version of "" (also released in 1956), and they did receive Academy Awards for that film.

It was named #41 on Channel 4's list of 100 Greatest Musicals. [http://www.channel4.com/film/newsfeatures/microsites/M/musicals/results_45to41.html]

The film's was first issued on LP in 1956 by , but only in mono. However, because the soundtrack had been recorded in then state-of-the-art , it was possible for Capitol to release a stereo LP of the album in 1958. That version was made somewhat shorter than the mono by lopping off half of the complete "Carousel Waltz" (an instrumental piece) as heard on the album. (This was necessary because of a difference that existed then between mono and stereo grooves.)

Three editions of the soundtrack album were issued on , all in stereo. The first, issued in 1986 by Capitol, was an exact duplicate of the 1958 stereo LP. The rights then were obtained by , which issued a second edition of the album, this time featuring the complete "Carousel Waltz" in stereo for the first time, along with all of the other songs included on the previous CD and LP incarnations. This album was superseded in by Angel's "expanded edition" of the soundtrack, which, for the first time, featured practically all of the songs and music recorded for the film, including the dance music, resulting in a playing time of 70 minutes, as opposed to the original 45 minute stereo LP and CD.

Two songs recorded for the film, "You're a Queer One, Julie Jordan" (sung by Barbara Ruick and Shirley Jones) and "Blow High, Blow Low" (sung by Cameron Mitchell and a male chorus) were eventually left out of the movie because the producers wanted to keep the length at 128 minutes. They have, however, been included in all editions of the soundtrack album. "The Highest Judge of All", a song which precedes Billy's meeting with the starkeeper in the show, in which he asks to meet God, was eliminated from the film score and does not appear on the soundtrack album, presumably because the flashback scenes precluded it. Mr. Snow's sentimental song, "Geraniums in the Winder", which serves as an introduction to "Stonecutters Cut it On Stone", was also eliminated, as was a reprise of "Mister Snow". As with "The Highest Judge", neither "Geraniums" nor the reprise of "Mister Snow" were ever recorded for the film, and have not appeared on any editions of the film's soundtrack. One verse of "Stonecutters Cut It on Stone" which appears on the album was omitted from the film, perhaps because it contains a veiled reference to sex and the movie censors of the day might have objected.

The soundtrack album also featured (as noted above) the complete version of the "Carousel Waltz" which is first heard at the beginning of the original show and early in the film. Because of its nearly eight-minute length, only an abridged version of the waltz was actually heard in the movie, and many stage productions of "Carousel" tend to shorten the piece as well, because of time considerations. In addition, the soundtrack album version of the song "When the Children Are Asleep" includes the long introductory section to the song sung by Mr. Snow as it is in the show; the film does not use this. The soundtrack album also includes a section of "If I Loved You" not in the film. The lyric of this section, which is supposed to be sung by Billy Bigelow, is as follows:

"Kind of scrawny and pale
"Pickin' at my food
"And lovesick like any other guy.
"I'd throw away my sweater
"And dress up like a dude
"In a dickey and collar and a tie,
"If I loved you".

was originally cast to play Billy Bigelow. He even pre-recorded part of the soundtrack. But when he arrived on the set, Sinatra discovered that he had to shoot the scenes two times: one for regular Cinemascope and the other for CinemaScope 55. Sinatra, who never liked to do two takes of a scene, walked away from the set and said: “You’re not getting two Sinatras for the price of one”. Ironically, just after he left, the producers found a way to film the scene once on 55mm, then transfer it onto 35mm; thus, the film did not have to be shot twice. But on February 14, 1958, guested on the "" and was able to perform with the host “If I Loved You”. This performance gives a taste of what could have been if Sinatra had not abandoned Carousel and can be seen on the DVD "Sinatra - The Classic Duets". The songs that Sinatra recorded for the original soundtrack were never released to the general public due to contractual issues. “Soliloquy” was one of the favorite songs of Frank Sinatra. He recorded it in the forties for Columbia, tried it at Capitol in the fifties and recorded it again in the sixties for .

Carousel was made into a videotaped television special and broadcast on May 7, 1967 on ABC-TV. The special starred as Billy, Mary Grover as Julie, as Carrie and as Jigger. was the choreographer. The television version did not use a flashback framework, and retained Billy's suicide, rather than having him accidentally killed.