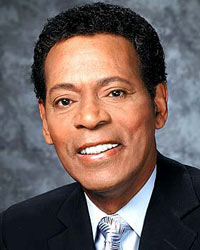 McCormick was born in . He began his broadcasting career in the late 1950s as a , upon graduating from . He first came to Los Angeles in 1964, working at then- radio station . He later moved across town to popular music outlet KFWB-AM, before they instituted an all-news format in the late 1960s.

McCormick became one of the first Black newscasters in the country, when he started at Los Angeles' in 1969. Shortly thereafter, he moved across town to KTLA in May 1971, and worked there until his passing in 2004.

At KTLA, he served as a features reporter (such as business and health & fitness) on the station's 10 pm weeknight newscasts, while serving as lead anchor on its weekend editions, and co-hosting "Making It: Minority Success Stories", a program which profiled successful minority business people. [ [http://www.tv.com/larry-mccormick/person/4947/summary.html Larry McCormick Photos - Larry McCormick News - Larry McCormick Information ] ]

McCormick was known to be very involved in the Los Angeles community, participating in various charities and events, including hosting local editions of the , back when KTLA carried the telethon locally (the telethon has aired on since 1996). Also, for a twelve-year span (1988–2000), he hosted the Academic Decathlon, including two national academic decathlons.

In addition to being a news reporter, McCormick appeared in numerous films and television series over the years, often playing himself as a reporter, but also portrayed other kinds of roles.

As an actor, McCormick usually appeared in guest spots on TV shows, mostly on TV dramas and sitcoms, such as ""; ""; "" (in a memorable 1979 episode as Florence's strict and ultra-conservative born-again beau); ""; and "". He also made appearances in such movies as "" (1989) and "" (2003), which was his final film appearance. McCormick also did voice over work in such Saturday morning cartoon series as "" , and "".

In 1994, McCormick was honored with the , a high, prestigious honor given annually by the . In June 2001, KTLA honored McCormick by renaming one of its soundstages at in his name. [ [http://ktla.trb.com/about/station/ktla-about-history1,0,2611296.htmlstory?coll=ktla-footer&sitemap KTLA Historical Timeline | About the Station | KTLA The CW | Where Los Angeles Lives ] ] [ [http://findarticles.com/p/articles/mi_m1355/is_6_100/ai_76800065 Los Angeles Television Station Honors Black Newsman Larry McCormick - KTLA-TV - Brief Article | Jet | Find Articles at BNET.com ] ]