The Legend of Nigger Charley

The Legend of Nigger Charley 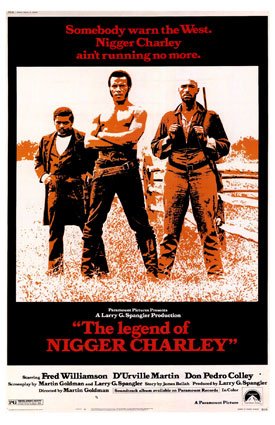 "The Legend of Nigger Charley" is a western film directed by . The story of a trio of escaped slaves, it was released during the heyday of blaxploitation films.

The film stars as Nigger Charley. The film is in the . It was followed by one sequel, "."

"Somebody warn the West. Nigger Charley ain't running no more."

Charley, after undergoing a beating by white men, escapes with two fellow slaves before being sold to a different plantation owner. He is put up for sale after his ailing plantation owner says he can no longer afford him.

The three fugitives are put down when they engage in everyday activities. For instance, when Charley asks a bartender for three beers, he is asked, "Don't you know your place, nigger?" In response, Charley beats a patron and forces the bartender to flee.

He then tells his friends, "I ain't never gonna be a slave again for no man ... I ain't taking no shit from no white man again. I'm a free man, and that's the way I'm gonna die."

The three seek their freedom in the . But they are chased by a gang of white men on horseback, who vow not to let them go free. Throughout their journey, the escaped slaves meet villains and violence.

The film ends with Charley and his friend, Toby, surviving an intense shootout and riding off. Toby asks "Where shall we go now, Charley?" Charley responds "Don't matter. Wherever we go, there's trouble waiting for us."

However, the film has since fallen into obscurity, and is not available on .

When it was released in 1972, critic awarded the film two stars out of four, criticizing it for being repetitive and exploitative. However, Ebert also wrote that

"The Legend of Nigger Charley" is frustrating partly because of the high level of acting talent in the cast. When you see fine actors being thrown into exploitative scripts, you begin to get a little angry. If the current group of black-oriented movies has proven anything, it's that there's a large pool of skilled and interesting black actors in Hollywood. Whether it will forever be necessary for them to waste their talents in dumb screenplays is a question that must come to them sometimes late at night. [cite web
last = Ebert
first = Roger
authorlink =
coauthors =
title = "The Legend of Nigger Charley"
work =
publisher = Chicago Sun-Times
date = May 23, 1972
url = http://rogerebert.suntimes.com/apps/pbcs.dll/article?AID=/19720523/REVIEWS/205230301/1023
format =
doi =
accessdate = 2007-01-22]