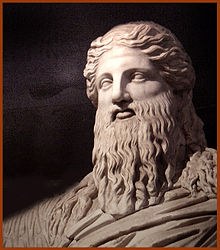 Head detail of the Dionysus Sardanaplus from the National Roman Museum

The Dionysus Sardanapalus is an uncommon Hellenistic-Roman Neo Attic sculpture-type of the god Dionysus, misnamed after the king Sardanapalus. Unlike most contemporary figurations of Dionysus as a lithe youth, the self-consciously archaising god is heavily draped, with an ivy wreath and a long archaic-style beard; probably he bore a thyrsos in a raised right hand, now missing.[1]

The misidentification with Sardanapalus was erroneously confirmed in the example in the Vatican Museums, which was provided with a 17th-century restorer's inscription on a band across its chest with CΑΡΔΑΝΑΠΑΛΛΟC(Sardanapalus), giving the type its erroneous name (it has no true association with this legendary king). It was also restored with a modern thyrsus in wood and iron. 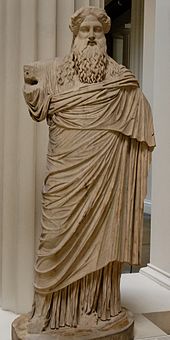 Dionysus Sardanapalus from the British Museum

In the early 19th century, Ennio Quirino Visconti cogently argued, against Johann Joachim Winckelmann and other earlier antiquarians, that the "Sardanapalus" of the Museo Pio-Clementino was in fact a Dionysus.[2]

All the surviving Hellenistic-Roman variants are copied from a Greek original of about 325 BC. The type first occurred at a time when the god's iconography was otherwise changing to a largely youthful and effeminate physical type (as seen, for example, here). The Romans elaborated the Sardanapalus type further, often showing the god with subsidiary figures. Though the type appears restrained, multiple copies of a popular relief sculpture exist with a figure of the same type, but drunk and propped up by a satyr.

In Oliver Stone's biopic Alexander (2004), Dionysus is shown on-screen as bearded, longhaired, crowned with ivy, and draped in a lion skin and voluminous chiton, in a variation on this "Sardanapalus" statue type.[4]