The imperial venus clam, Chione latilirata, is a bivalve mollusc in the family Veneridae. It grows to about 4.5 cm (1.5 inches), and lives off the eastern shores of North and South America, south of Cape Hatteras, in 20 to 40 m (60 to 120 ft) depths. Occasionally it is found washed up on ocean shores. It ranges from North Carolina to Brazil. This species has been frequently found among catches of the Atlantic calico scallop. 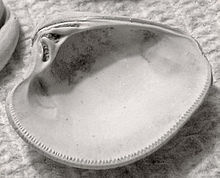 Its shell is rounded, triangular and well-inflated with large, heavy concentric ridges and often sharply shelved at the top. Its ridges become fragile on dry specimens. Cardinal and lateral teeth are located on its hinge. Its coloration varies, but often has a tan exterior with lavender blotches and radial stripes.

Imperial venus are of the family Veneridae which contains over four hundred known species, though not to the genus Venus which contains the venus clams in the strictest sense. Species vary in shape from circular to triangular. Veneridae colonize the sandy ocean bottom, and their populations are often dense and large.

The Veneroida order typically have a folded gill structure which is well developed for filtering out small food particles.