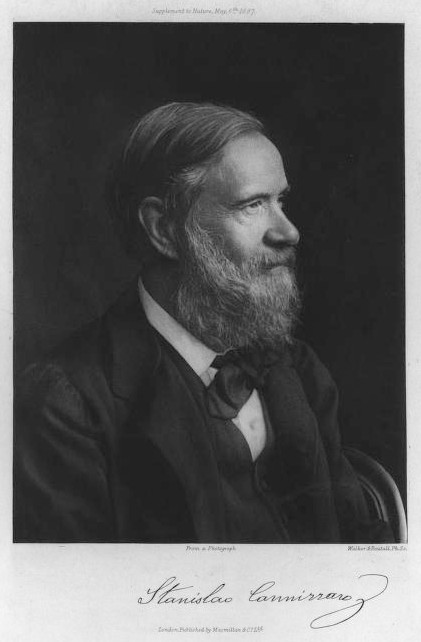 Cannizzaro was born in . In 1841 he entered the university there with the intention of making medicine his profession, but he soon turned to the study of chemistry. In 1845 and 1846 he acted as assistant to Raffaele Piria (1815 &ndash; 1865), known for his work on , and who was then professor of chemistry at and subsequently occupied the same position at .

During the , Cannizzaro served as an artillery officer at and was also chosen deputy for in the Sicilian parliament; and after the fall of Messina in September 1848 he was stationed at . On the collapse of the insurgents, Cannizzaro escaped to in May 1849, and after visiting various French towns reached in October. There he gained an introduction to 's laboratory, and in conjunction with (1817 &ndash; 1883) made his first contribution to chemical research, in 1851, when they prepared by the action of on in ethereal solution. In the same year Cannizzaro accepted an appointment at the National College of , as professor of physical chemistry. In Alessandria he discovered that aromatic aldehydes are decomposed by an alcoholic solution of potassium hydroxide into a mixture of the corresponding acid and alcohol. [cite journal
author = Cannizzaro, S. | title = Ueber den der Benzoësäure entsprechenden Alkohol | journal = | year = 1853 | volume = 88 | pages = 129 &ndash; 130 | doi = 10.1002/jlac.18530880114] For example, benzaldehyde decomposes into benzoic acid and benzyl alcohol, the , as shown below.

Apart from his work on organic chemistry, which includes also an investigation of santonin, Cannizzaro rendered great service to chemistry with his 1858 paper "Sunto di un corso di Filosofia chimica", or "Sketch of a course of chemical philosophy", in which he insisted on the distinction, previously hypothesised by Avogadro, between atomic and molecular weights. [cite journal | author = de Milt, Clara | title = The Congress at Karlsruhe | journal = Journal of Chemical Education | year = 1951 | volume = 28 | pages = 421 &ndash; 425 | url = http://search.jce.divched.org:8081/JCEIndex/FMPro?-db=jceindex.fp5&-lay=wwwform&combo=karlsruhe&-find=&-format=detail.html&-skip=1&-max=1&-token.2=1&-token.3=10 | accessdate=2007-08-29 ] [cite journal | author = Hartley, Harold | title = Stanislao Cannizzaro, F.R.S. (1826 &ndash; 1910) and the First International Chemical Conference at Karlsruhe | journal = Notes and Records of the Royal Society of London | year = 1966 | volume = 21 | pages = 56 &ndash; 63 | url = | accessdate = | doi = 10.1098/rsnr.1966.0006 ] Cannizzaro showed how the atomic weights of elements contained in volatile compounds can be deduced from the molecular weights of those compounds, and how the atomic weights of elements of whose compounds the vapour densities are unknown can be determined from a knowledge of their specific heats. For these achievements, of fundamental importance to atomic theory, he was awarded the by the in 1891.

In 1871, Cannizzaro's scientific eminence secured him admission to the Italian senate, of which he was vice-president, and as a member of the Council of Public Instruction and in other ways he rendered important services to the cause of scientific education in Italy. [1911]

* [http://www.archive.org/details/sketchofcourseof00cannrich "Sketch of a course of chemical philosophy"] by Cannizzaro (1858) - Edinburgh: Alembic Club Reprint No. 18 (1911).