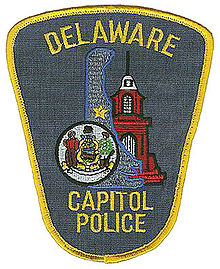 The Delaware Capitol Police was founded as a three-man unit in 1965 to deter vandalism at the Legislative Hall, Delaware. The unit was originally known as Capitol Security.

Responsibilities were eventually expanded to cover other state-owned properties in Delaware while the unit remained unfunded (being maintained completed through donations and transfer of equipment from other law enforcement agencies). Officers initially received no formal training and were armed only with a nightstick, handcuffs and tear gas.

In 1974, Delaware Director of Administrative Services Thomas Murray overhauled the organization, providing policing and firearms training. Having been sworn in as constables, the officers now had the power of arrest on state property. New equipment and uniforms were issued at this time and the organisation became known as the Capitol Security Police.

In 1980 the organization adopted its current name. Arrest powers were expanded statewide in 1982. Further changes in 1995 saw a redesign of the patch worn by officers and integration of communications systems with the Delaware State Police in order to improve response times to emergencies.

The Delaware Capitol Police have jurisdiction over State-owned properties in all three counties, serving all three branches of government - executive, judicial, and legislative. Most notably, the Capitol Police provide security screening and patrol services in Delaware's courthouses, including investigating crimes taking place within the courthouses, responding to security incidents in courtrooms, supplementing security services provided by court bailiffs, detaining individuals who are found at the courthouse with open capiases, and taking newly-convicted or sentenced defendants into custody pending transfer to the Delaware Department of Correction. The Capitol police also provide security and screening services at the Delaware State Capitol, ensuring security of the Delaware judiciary, and providing executive protection at the Governor's official residence, Woodburn.