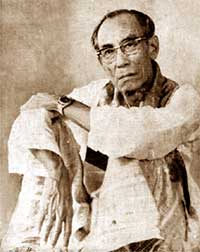 Sachin Dev Burman ( _bn. শচীন দেব বর্মন)(, - , ) (also credited as Burman da, Kumar Sachindra Dev Barman, or S. D. Burman) was one of the most famous music composers and an all-time great Bengali singer and composer. His son also achieved great success as a Bollywood music director in his own right.

He began his training in classical music under his father, who was a ist and singer

He did his from

S D Burman composed music for 100 movies (inclusive of Bengali films). "Agneepath" (1990) had an uncredited song composed by him - "Nazar lagi raja tore bangle par" from "Kalapani" (1958). He also sang about 20 film songs (inclusive of Bengali films) for which he composed music though he may not have been the music director of the films. He also sang for one of the songs of "Amar Prem" (1971), a film whose music was composed by his son, . S.D. Burman's compositions have been mainly sung to a large extent by the likes of , , (wife of and a playback singer herself), ,, and . and have also sung songs composed by him. He has also sung a number of private songs and bhajans, notable ones being "Dheere se jana bagiyan mein" and "Kaun nagariya javun re Bansiwale..".

He started working as a radio singer on Calcutta Radio Station in 1932, where his early work was based on i and folk-music, and soon made a reputation for himself in folk and light classical music, consequently his film compositions were often influenced by his huge repertory of folk-tunes from the Bengali, , and traditions of Tripura Kingdom. In the same year, his first record was also released (Hindustan Musical Product), with "Khamaj" semi classical, "E Pathery Aaj Eso Priyo" on one side and the folk "Dakle Kokil Roj Bihane" on the reverse side". In the following decade he reached his peak as a singer, cutting as many as 131 songs in Bengali, and also sang for composers like Himangsu Dutta, RC Boral, Nazrul Islam and Sailesh Das Gupta

In 1934, he attended the All India Music Conference, at the invitation of , where he presented his Bengali , at to an illustrious audience, with the likes of and the inimitable of . Later in the year he was invited to Bengal Music Conference, Kolkata, which was inaugurated by , here again he sang his thumri, and was awarded a Gold Medal

As a music composer, he started with Bengali plays, "Sati Tirtha" and "Janani", and eventually gave his first score in film, "Rajgee" in 1937, his second film "Rajkumarer Nirbashan" (1940) became a hit, there was no turning back after that. He gave successful music in films like, "Jevaan Sangini", "Protishodh" (1941), "Abhoyer Biye" (1942), and "Chaddobeshi" (1944) , he continued giving music in , even after he moved to Bombay in 1944, and started the second inning of his musical career, giving music for over 17 Bengali films in the all

He made his film debut singing in "Yahudi ki Ladki" (1933) but the songs were scrapped and re-sung by . His first film as a singer was finally "Sanjher Pidim" (1935).

In 1944, he moved to Bombay, at the request of Sasadhar Mukherjee of , who asked him to give score for two starrers, "Shikari" (1946) and "Aath Din" [ [http://www.downmelodylane.com/sdburman.html SD Burman] "www.downmelodylane.com".] , but his first major breakthrough came the following year with the company's "Do Bhai" (1947). The song "Mera Sundar Sapna Beet Gaya" sung by was her breakthrough song into the film industry. In 1949, came "Shabnam", his biggest hit yet with , especially noticeable for its multi-lingual hit song "Yeh Duniya Roop ki Chor", by Shamshad Begum, which became a rage in those days [ [http://www.upperstall.com/people/sd-burman SD Burman] "".]

Disillusioned with the materialism of Bombay, S D Burman left the starrer "Mashaal" (1950) incomplete and decided to board the first train back to . Fortunately, he was dissuaded from doing so.

In 1957, S D Burman fell out with and adopted her younger sister as his lead female singer. The team of S D Burman, , and lyricist became popular for their duet songs. Thus, he was responsible along with for shaping as a singer of repute, who became his daughter-in-law after she married .

In 1958, S D Burman gave music for 's house production "", the same year he was awarded the for Music direction, and remains the only music director to have won the prestigious award [ [http://www.sangeetnatak.com/programmes_recognition&honours_films_musicdirection.html Music Direction] " " Official listing.] .

Early on in his career, he refused to allow his voice be lip-synced on film by actors

Ill health caused a slump in his career in the early 1960s but he gave many hit films in late 1960s. In 1961, S D Burman and came together during the recording of R D Burman's first song for the movie "Chhote Nawab" (1961). They reconciled their differences and started working again in 1962.

Other S D Burman hits from this period were "Bandini" (1963) and "Ziddi" (1964). In "Bandini", Sampooran Singh (well known as ), made his debut as a lyricist with the song "Mora Gora Ang lai le, mohe shaam rang daai de". "" (1965) starring Dev Anand, was probably the best of his work during the time with all the songs super hit as well as the film; but unfortunately it did not receive the in best music director category for that year, which remained always a discussion among the Bollywood film pandits.

"Aradhana" (1969) is considered a landmark score in the Bollywood history. The music of the movie shaped the careers of singer , lyricist , filmmaker Shakti Samanta and (associate music director). For the song "Mere Sapno ki raani", Sachin Dev made R.D play the mouth organFact|date=June 2008. It was responsible in 's second coming and went on to make him the top male of Hindi Films.

and S D Burman continued their musical partnership in "" (1969).

S D Burman went into coma soon after recording the song "Badi sooni sooni" (sung by ) for the film "Mili". He died on , in Bombay (now ).