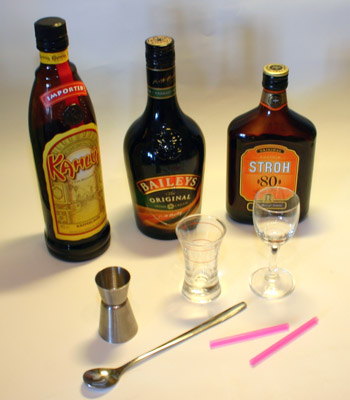 The name refers to the US long-range . This bomber was used in the for the release of incendiary bombs, which likely inspired today's flaming variant of the cocktail.

The origin of the B-52 is uncertain. One school that the B-52 was invented at the Keg Steakhouse in Calgary, Alberta in 1977. [cite book|last=Mulligan|first=Shawn M.|title=Mulligan's Bar Guide|year=2005|publisher=Harper Collins|isbn=0002007223] It is also rumored to have been created by Adam Honigman, a former bartender at New York City's Maxwell's Plum bar, during the late 1970s or early 1980s.Fact|date=September 2008

The B-52's widespread popularity has resulted in many variations, each earning a slightly different designation (see variations below for a small sampling). All together, the drinks are referred to as the "B-50 series" of layered cocktails.

There are special machines that can prepare a B-52 (or other multi-layered cocktails) in only a few seconds. However, an experienced bartender usually relies on the traditional, hand-made preparation. Cocktails with horizontal layering, like the B-52, are also called "Pousse Café". This method of the preparation is called "building," as opposed to blending or shaking, thus, B-52s are "built."

B-52s are usually served in a shooter or , although a heatproof glass is required when a "flaming B-52" is served. First, a coffee liqueur, such as or , is poured into the glass. Next, is poured very slowly over the back of a cold ; taking care to avoid disturbing the lower layer as the second liquor is poured on top. Just as carefully, is poured atop the Irish Cream using the bar spoon.

For a Flaming B-52, substitute a dark overproof with 60-80% alcohol by volume for the Grand Marnier. The higher alcohol content is required to support combustion. Filling the glass to the top reduces the amount of glass exposed to the flames, making the glass less likely to break, but the drink easier to spill. It is best to leave the flaming B-52 on the bartop and drink it through a straw. Once lit the drink should be finished quickly to avoid overheating the glass and burning the straw. Unless the flame is extinguished before drinking, a fireproof straw—such as one made of metal—may be preferred.