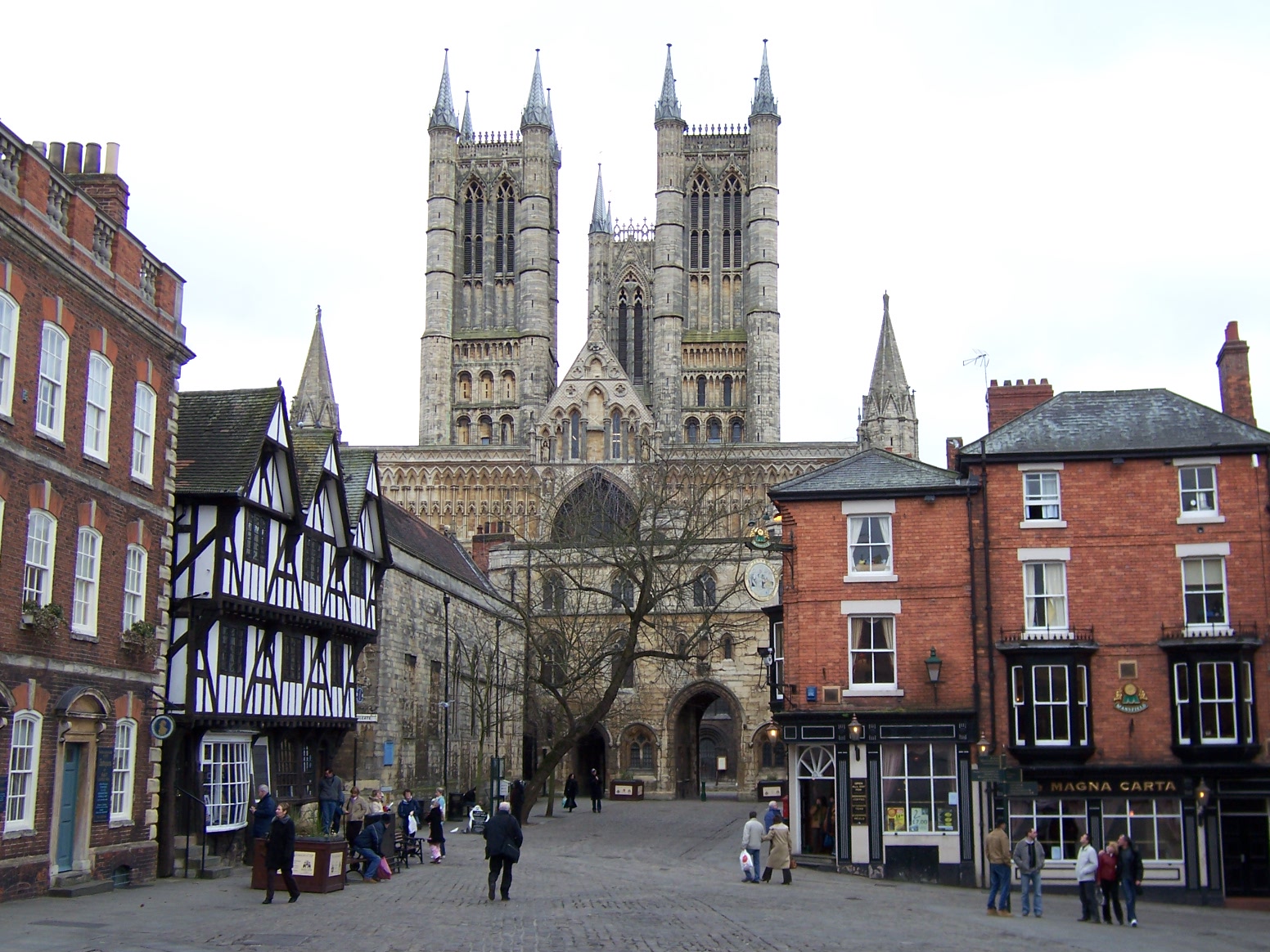 Lincoln Cathedral (in full The Cathedral Church of the Blessed Virgin Mary of Lincoln, or sometimes St. Mary's Cathedral) is a historic cathedral in Lincoln in and seat of the in the . It was the tallest building in the world for over 200 years (1300-1549), but the central spire collapsed in the sixteenth century and was not rebuilt. It is highly regarded by architectural scholars; the eminent Victorian writer declared, "I have always held... that the cathedral of Lincoln is out and out the most precious piece of architecture in the British Isles and roughly speaking worth any two other cathedrals we have."

William the Conqueror ordered the first cathedral to be built in Lincoln, in . Before that, St. Mary's Church in Lincoln was a mother church but not a , and the seat of the diocese was at Dorchester Abbey in , Oxfordshire. Lincoln was more central to a diocese that stretched from the Thames to the Humber. Bishop Remigius built the first Lincoln Cathedral on the present site, finishing it in and then dying two days before it was to be consecrated on of that year. About fifty years later, most of that building was destroyed in a fire. Bishop Alexander rebuilt and expanded the cathedral, but it was destroyed by an about forty years later, in .After the earthquake, a new bishop was appointed. The new bishop was St , originally from , ; he began a massive rebuilding and expansion programme. Rebuilding began at the east end of the cathedral, with an apse and five small radiating chapels. The central nave was then built in the Early English Gothic style. Lincoln Cathedral soon followed other architectural advances of the time - pointed arches, flying and ing were added to the cathedral. This allowed the creation and support of larger windows.

The cathedral is the 3rd largest in Britain (in floor space) after St Paul's and , being 484ft by 271ft. It is Lincolnshire's largest building and until 1549 the tower was the tallest medieval tower in Europe. Accompanying the cathedral's large bell, Great Tom of Lincoln, is a quarter-hour striking clock. The clock was installed in the early 19th century.

There are thirteen bells in the south-west tower, two in the north west tower, and five in the central tower (including Great Tom).

The matching Dean's Eye and Bishop’s Eye were added to the cathedral during the late Middle Ages. The former, the Dean's Eye in the north transept dates from the rebuild begun by St Hugh, it was finally completed in . The latter, the Bishop’s eye, in the south transept was re-constructed 100 years later in . A contemporary record, “The Metrical Life of St Hugh”, refers to the meaning of these two windows (one on the dark, north, side and the other on the light, south, side of the building):

“For north represents the devil, and south the Holy Spirit and it is in these directions that the two eyes look. The bishop faces the south in order to invite in and the dean the north in order to shun; the one takes care to be saved, the other takes care not to perish. With these Eyes the cathedral’s face is on watch for the candelabra of Heaven and the darkness of Lethe (oblivion).”

After the additions of the Dean’s eye and other major Gothic additions it is believed some mistakes in the support of the tower occurred, for in either in or the main tower collapsed. A new tower was soon started and in the Cathedral petitioned Henry III to allow them to take down part of the town wall to enlarge and expand the Cathedral, including the rebuilding of the central tower and spire. They replaced the small rounded chapels (built at the time of St Hugh) with a larger east end to the cathedral. This was to handle the increasing number of pilgrims to the Cathedral, who came to worship at the shrine of .Between the years and the central tower was raised to its present height of 83 m (271 feet). The western towers and front of the cathedral were also improved and heightened. At this time, a tall lead-encased wooden spire topped the central tower but was blown down in a storm in . With its spire, the tower reputedly reached a height of 525 feet (which would have made it the world's tallest structure, surpassing the , which held the record for almost 4000 years). Other additions to the cathedral at this time included its elaborate carved screen and the 14th century misericords, as was the Angel choir. For a large part of the length of the cathedral, the walls have arches in relief with a second layer in front giving the illusion of a passageway along the wall. However the illusion does not work, as the stonemason, copying techniques from France, did not make the arches the correct length needed for the illusion effect.In 1290 Eleanor of Castile died. As his Queen Consort of England, King Edward I decided to honour her with an elegant funeral procession. After embalming, which in the thirteenth century involved evisceration, Eleanor's viscera were buried in Lincoln cathedral, and Edward placed a duplicate of the tomb there. The Lincoln tomb's original stone chest survives; its effigy was destroyed in the 17th century and replaced with a 19th-century copy. On the outside of Lincoln Cathedral are two prominent statues often identified as Edward and Eleanor, but these images were heavily restored in the 19th century and probably were not originally intended to depict the couple. See|Eleanor cross

In 1398 and founded a there to pray for their souls, and in the 15th century the building of the cathedral turned to chantry or memorial chapels. The chapels next to the Angel Choir were built in the Perpendicular style, with an emphasis on strong vertical lines, which survive today in the window tracery and wall panelling.

The Bishop of Lincoln was one of the signatories to the and for hundreds of years the Cathedral has held one of the four remaining copies of the original. It now resides in the nearby , where it is on permanent display. There are three other surviving copies, two at the and one at .

One of the stone carvings within the Cathedral is the . There are several variations of the legend surrounding the figure.

According to 14th-century legend, two mischievous creatures called imps were sent by Satan to do evil work on Earth. After causing mayhem elsewhere in Northern England the two imps headed to Lincoln Cathedral where they smashed tables and chairs and tripped up the Bishop. An angel appeared in the Angel Choir and ordered them to stop. One of the imps sat atop a stone pillar started throwing rocks at the angel whilst the other imp cowered under the broken tables and chairs. The angel turned the first imp to stone allowing the second imp to escape. The imp that turned to stone, the Lincoln Imp, can still be found, frozen in stone, sitting atop his stone column in the Angel Choir.

The Wren Library houses a rare collection of over 277 manuscripts, including the text of the Bede.

According to the cathedral website, over £1 million a year is spent on keeping the cathedral in shape; the most recent project completed has been the restoration of the West Front in 2000. About ten years ago it was discovered that the es on the east end were no longer connected to the adjoining , and repairs were made to prevent collapse. The most recent problem was the discovery that the stonework of the Dean's Eye window in the transept was crumbling, meaning that a complete reconstruction of the window has had to be carried out according to the conservation criteria set out by the .

There was a period of great anxiety when it emerged that the stonework only needed to shift 5mm for the entire window to collapse. Specialist engineers removed the window's tracery before installing a strengthened, more stable replacement. In addition to this the original stained glass was cleaned and set behind a new clear isothermal glass which offers better protection from the elements. By April 2006 the renovation project was completed at a cost of £2 million.Recently, concerns have been growing once more about the state of the West Front, as there has been some stonework falling, which has raised questions as to the effectiveness of the repairs carried out in 2000.

Lincoln Cathedral is at present a very popular destination and is visited by over 250,000 tourists a year. The semi-mandatory entrance fee for week day visiting is £4.00 or about $8.00 which is charged on admission throughout the tourist season. The cathedral offers tours of the cathedral, the tower and the roof. The peak of its season is the , accompanied by a massive annual production of Handel's "Messiah". The current Bishop of Lincoln is Dr John Saxbee. The current Dean of the Cathedral is the Very Reverend , who had previously been Canon Treasurer of in London.

The Choir is currently formed of 11 Lay Vicars (three of whom are choral scholars), a team of c.20 boys and a team of c. 20 girls.

The Cathedral accepted female choristers in . Lincoln was only the second Cathedral in the country to adopt a separate girls' choir, after , and remains one of few who provide exactly the same musical opportunities and equal weekly singing duties to both girls and boys. All the choristers are educated at .

The organ is one of the finest examples of the work of 'Father' , dating from 1898 (it was his last cathedral organ before his death in 1901). There have been two restorations of it by in 1960 and 1998. The specification of the organ can be found on the [http://npor.emma.cam.ac.uk/cgi-bin/Rsearch.cgi?Fn=Rsearch&rec_index=N14308 National Pipe Organ Register]

* An important scene in 's novel, "The Rainbow", takes place at Lincoln Cathedral.
* The cathedral features in 's novel "".

*The cathedral was used for the filming of "The Da Vinci Code" (based on the book of the same name). Filming took place mainly within the cloisters and chapter house of the cathedral, and remained a closed set. The Cathedral took on the role of , as the Abbey had refused to permit filming. Although there was protest at the filming, the filming was completed by the end of August 2005. In order to make the Lincoln chapter house appear similar to the Westminster Chapter House, murals were painted on a special layer over the existing wall, and elsewhere polystyrene replicas of Isaac Newton's tomb and other Abbey monuments were set up. For a time these murals and replicas remained in the Chapter House, as part of a Da Vinci Code exhibit for visitors, but in January 2008 they were all sold off in an auction to raise money for the Cathedral. [http://news.bbc.co.uk/1/hi/england/lincolnshire/7215980.stm]
*The cathedral also doubled as Westminster Abbey for the film "", filmed in September 2007. [http://www.guardian.co.uk/comment/story/0,,2157327,00.html]