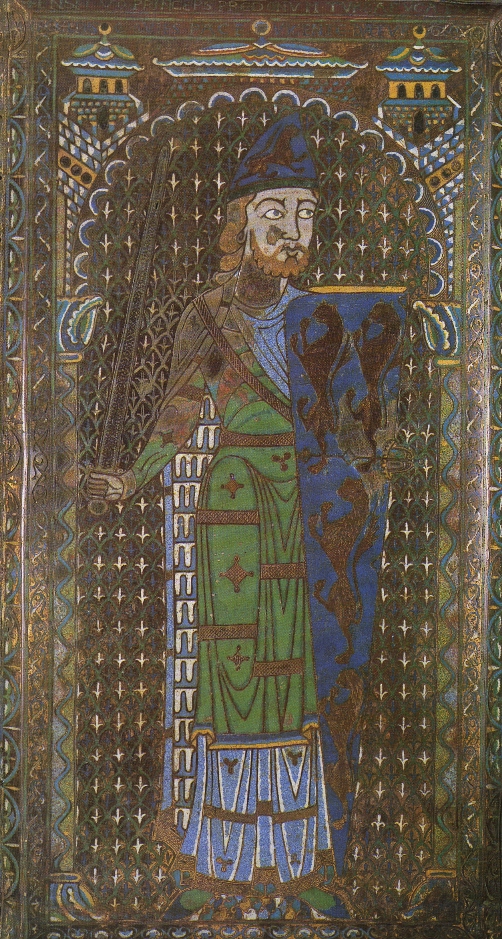 Geoffrey V (24 August 1113 &ndash; 7 September 1151), called the Handsome ( _fr. le Bel) and Plantagenet, was the , Touraine, and Maine by inheritance from 1129 and then by conquest from 1144. By his marriage to the , daughter and heiress of , Geoffrey had a son, Henry Curtmantle, who succeeded to the English throne and founded the to which Geoffrey gave his nickname.

Geoffrey was the elder son of and Eremburga of La Flèche, heiress of . Geoffrey received his nickname for the yellow sprig of broom blossom ("genêt" is the French name for the "genista", or broom shrub) he wore in his hat as a badge. King Henry I of England, having heard good reports on Geoffrey's talents and prowess, sent his royal legates to Anjou to negotiate a marriage between Geoffrey and his own daughter, Matilda. Consent was obtained from both parties, and on 10 June 1128 the fifteen-year-old Geoffrey was knighted in by King Henry in preparation for the wedding. Interestingly, there was no opposition to the marriage from the Church, despite the fact that Geoffrey's sister was the widow of Matilda's brother (only son of King Henry) which fact had been used to annul the marriage of another of Geoffrey's sisters to the Norman pretender .

On 17 June 1128 Geoffrey married Empress Matilda, the daughter and heiress of King Henry I of England, by his first wife, and widow of . The marriage was meant to seal a peace between England/Normandy and Anjou. She was eleven years older than Geoffrey, very proud of her status as an Empress (as opposed to being a mere Countess). Their marriage was a stormy one with frequent long separations, but she bore him three sons and survived him.

The year after the marriage Geoffrey's father left for (where he was to become king), leaving Geoffrey behind as count of Anjou. describes Geoffrey as handsome, red-headed, jovial, and a great warrior; however, alleges that his charm concealed his cold and selfish character.

When King Henry I died in 1135, Matilda at once entered Normandy to claim her inheritance. The border districts submitted to her, but England chose her cousin Stephen of Blois for its king, and Normandy soon followed suit. The following year, Geoffrey gave Ambrieres, Gorron, and Chatilon-sur-Colmont to Juhel de Mayenne, on condition that he help obtain the inheritance of Geoffrey's wife. In 1139 Matilda landed in England with 140 knights, where she was besieged at Arundel Castle by King Stephen. In the "Anarchy" which ensued, Stephen was captured at Lincoln in February, 1141, and imprisoned at Bristol. A legatine council of the English church held at Winchester in April 1141 declared Stephen deposed and proclaimed Matilda "Lady of the English". Stephen was subsequently released from prison and had himself recrowned on the anniversary of his first coronation.

During 1142 and 1143, Geoffrey secured all of Normandy west and south of the Seine, and, on 14 January 1144, he crossed the Seine and entered Rouen. He assumed the title of Duke of Normandy in the summer of 1144. In 1144, he founded an Augustine priory at Chateau-l'Ermitage in Anjou. Geoffrey held the duchy until 1149, when he and Matilda conjointly ceded it to their son, Henry, which cession was formally ratified by King the following year.

Geoffrey also put down three baronial rebellions in Anjou, in 1129, 1135, and 1145-1151. He was often at odds with his younger brother, Elias, whom he had imprisoned until 1151. The threat of rebellion slowed his progress in Normandy, and is one reason he could not intervene in England. In 1153, the allowed Stephen should remain King of England for life and that Henry, the son of Geoffrey and Matilda should succeed him.

Geoffrey also had illegitimate children by an unknown mistress (or mistresses): Hamelin; Emme, who married , Prince of ; and Mary, who became a nun and Abbess of Shaftesbury and who may be the poetess . Adelaide of Angers is sometimes sourced as being the mother of Hamelin.

The first reference to Norman heraldry was in 1128, when Henry I of England knighted his son-in-law Geoffrey and granted him a badge of gold s (or s) on a blue background. (A gold lion may already have been Henry's own badge.) Henry II used two gold lions and two lions on a red background are still part of the arms of Normandy. Henry's son, Richard I, added a third lion to distinguish the arms of England.