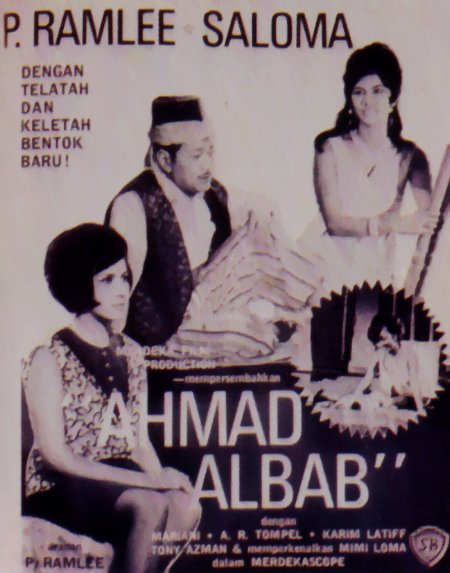 "Ahmad Albab" is a 1968 n drama-comedy film directed by, written by and starring n artiste about an arrogant and materialistic man who marries off his outspoken daughter to a poor villager to teach her a lesson. The story is in the style of traditional Malay with an underlying moral message. The movie features real-life husband and wife and acting opposite each other.

Mashood is a rich man who believes that happiness and wealth are the same thing, and that both are in his hands. He has three daughters: Zahara, Suhara and Mastura. Zahara and Suhara share his life philosophies, but Mastura doesn't and frequently clashes with their father. Mashood decides to prove his beliefs by marrying off Zahara and Suhara to two young men (Muharram and Safar) from wealthy families while Mastura is married off to a poor goat-herder named Syawal.

Syawal and Mastura live a simple life together in Syawal's village but are happy. One day, as he is herding the goats, one of them wanders away from the pack. Syawal follows it into a cave, where he sees a large chest of a treasure. A djinn appears and tells Syawal that the treasure belongs to Ahmad Albab, who is the only person who can claim it. Syawal obeys the djinn and leaves.

Elsewhere, Muharram and Safar have used up all their wives' money and decide to steal from a jewelry store, pretending in front of their wives that their business has boomed. Using this money, they buy the goats that Syawal was herding, putting him out of a job. However Mastura has started up a small farm next to their house, and this becomes their new livelihood.

Mashood's birthday is around the corner and he invites his three daughters and their husbands to his home, where they are required to give him a birthday present. Muharam and Safar give him fancy presents which pleases Mashood. As for Syawal, he presents a packet of salt and a packet of sugar, which Mastura explains represents their love for him. Mashood is angered by this, saying that love should be like jewels and gold. Then Mastura presents to her father meal she'd cooked for him. Mashood attempts to eat it but the food tastes bad, as it has been cooked without salt or sugar. Mastura explains that this is the meaning behind their present, for although salt and sugar are simple things, without them even the most delicious dish tastes bad. Mashood grumps at this and warns them that they won't be able to pull this trick again next year.

The three couples part ways. During this time, Mastura has a baby boy. Although at first Syawal and Mastura are overjoyed, their baby refuses to stop crying for weeks on end. Eventually Mastura and Syawal bring their baby boy to visit Mashood, who tries to cheer up his grandson. After several attempts, Mashood finally manages to cause the baby to stop crying by tapping on a door. Since the Arabic word for door is "Albab", Mashood names the baby "Ahmad Albab".

Syawal is shocked to hear this name and takes his baby back to the cave to show the djinn. The djinn sees the baby and says that all the treasure in the cave belongs to him, on the condition that Syawal brings Ahmad Albab to the cave every full moon to play with the djinn's wife and son. Syawal and Mastura become wealthy overnight, but even with this wealth they remain humble and help others who are in need.

Meanwhile, Muharram and Safar have run out of money again and try to rob the same jewelry store. However, this time the store owner is prepared and the pair are captured and brought to the police station. Zahara and Suhara are told to seek out a kind-hearted man name Syawal who will be able to pay the bail. All are shocked to learn that Syawal and Mastura have suddenly become rich, but Syawal and Mastura gladly pay the bail, setting Muharram and Safar free.

However, it is time again for Mashood's birthday gathering and his demand for gifts. In desperation, Muharram and Safar decide to rob Syawal's house, but they are caught. Syawal is disappointed in them, but agrees to give them presents for them to give to Mashood.

On the night of Mashood's birthday gathering, Muharram and Safar are quiet and subdued as Zahara and Suhara present Mashood a tray each of precious jewels as their gift to him. Mashood is impressed by the extravagant gift, and then turns to Syawal and Mastura, demanding their present. Syawal gives him a model of a , telling him that it is to remind him of God. Mashood balks at this present until Muharram and Safar break down and confess that they are thieves and all the jewels are from Syawal, not them. Mashood questions this disbelievingly until Syawal opens his robes to reveal a smart black suit underneath.

The three male characters who married Mashood's daughters are all named after Islamic months , and .