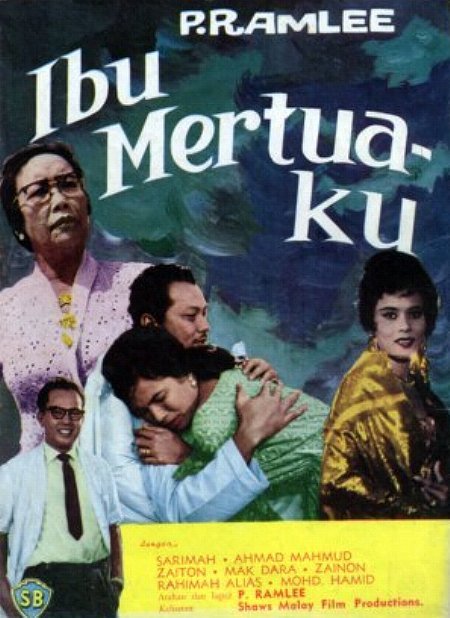 "Ibu Mertuaku" ("My Mother-in-Law") is a 1962 n film directed by and starring n silver-screen legend . The film's story revolves around the tragic love affair between Kassim Selamat, a poor musician, and Sabariah, the only daughter of a wealthy woman. The movie is notable in that the opening act starts out as a light-hearted , but at the 30 minute mark turns into a dramatic . Like a number of 's works, the film criticizes the unofficial caste system that separates the wealthy from the poor. This film is considered a n classic, and is remembered for the song "Di Mana Kan Ku Cari Ganti" and a famous eye-stabbing scene during the film's climax.

Set in 1960s , Sabariah Mansoor is a young woman who is fascinated with the music of Kassim Selamat, a small-time musician with great talent playing the . After one of his radio performances, Sabariah calls in to the studio to talk to him personally and express her admiration. They arrange to meet and it is love at first sight.

Sabariah's wealthy widowed mother Nyonya Mansoor wants Sabriah to marry Dr. Ismadi, an eye doctor, and is shocked when Sabariah tells her that she wants to marry Kassim Selamat. Nyonya Mansoor tells Sabariah that if she chooses Kassim, she will forfeit all her family's wealth and can never set foot in their house again. Sabariah still chooses Kassim, so Nyonya Mansoor arranges a quick a marriage ceremony for the pair, after which she gives them 5000 and casts them out of the house.

Kassim and Sabariah move to to start a new life. They are happy for a while, but soon all their money is used up and they have to live as paupers. Kassim wants to make money performing music, but Sabariah is against the idea as she thinks that she can make amends with her mother if Kassim renounces music forever. Kassim is forced to work as a labourer.

One day Kassim returns to their lowly home to see Sabariah crying in the arms of her mother. Nyonya Mansoor says that she would like to take Sabariah back to and care for her until she has given birth to the child she is pregnant with. Kassim lets Sabariah go, believing that she will return to him.

Months pass, during which Sabariah is cared for in comfort and under the wing of Nonya Mansoor and Dr. Ismadi. She eventually gives birth to a baby boy who is named Tajudin. At this time, Kassim receives a telegram from Nyonya Mansoor saying that Sabariah died during childbirth. Kassim falls into depression, crying for days without end and refusing to work. Unknown to him, Sabariah is alive and waiting for him in . Nyonya Mansoor's fake telegram was part of her plan to separate the pair.

Sabariah eventually divorces Kassim, believing that he abandoned her and their child. She also agrees to marry Dr. Ismadi. Sabariah and Dr. Ismadi agree to keep the identity of Tajudin's birth father a secret from everyone, including Tajudin himself.

During this time, Kassim's endless crying has rendered him completely blind. He cannot pay the rent, and he is sent out into the street, blind and wandering aimlessly. Kassim is eventually found by Mummy, a kind middle-aged woman who takes him into her home. Kassim then meets Mummy's daughter, Chombi, who has just recently lost her husband. The pair find friendship as they mourn their respective loved ones.

Kassim eventually reveals his talent with the saxophone, and after being encouraged by Mummy and Chombi, starts a new career in music using the stage name "Osman Jailani". Kassim, under the guise of Osman Jailani, becomes a hit and starts touring around all over Malaya. He eventually arrives in , where Sabariah and her new husband Dr. Ismadi decide to attend his performance.

When Sabariah sees her former husband, now blind, performing on stage, she is overcome with sadness. She asks her new husband to fix Kassim's eyes without charge. The operation is a success, and Kassim, Mummy and Chombi are all invited to stay at Dr. Ismadi's home with Sabariah and son while Kassim recovers. When Kassim's eye bandages are removed and he sees Sabariah at Dr. Ismadi's side, he has a moment of panic. Dr. Ismadi says that she cannot possibly be his dead wife but just a look-a-like, which Kassim reluctantly accepts.

Kassim returns to Dr. Ismadi's house where he confronts them with the truth just before entering his room and locking the door. Dr. Ismadi, Nyonya Mansoor and Sabariah beat at his locked door, begging for forgiveness. Kassim ignores them, and takes a pair of forks which he uses to pierce his eyes. Kassim then finally opens the door, once again blind and with streaks of blood flowing from his eyes. Nyonya Mansoor collapses when she sees him.

Kassim wanders out of the house until he bumps into Chombi, who is shocked to see his condition. He asks her to take him back to with her, and they go, leaving Sabariah crying as she watches Kassim leave and Dr. Ismadi looking at his tearful wife pensively.

Mak Dara, who played the wicked mother-in-law of the title, has recalled in various Malaysian documentaries that upon the release of the film, response was so good that random people would stop her in the street to scold her or spit on her.

In the recent release of the film on , the scene where Kassim Selamat stabs his eyes with forks has been edited. After Kassim turns away from the camera, the scene then cuts straight to the door opening with Sabariah and Nyonya Mansoor waiting outside. The intermediate shot of Kassim turning back to the camera with blood streaming from his eyes has been removed completely. It is currently unknown if the film will be re-released with this scene intact.

The opening song "Jangan Tinggal Daku" was re-used as the title song in a later film "". The two films are unrelated, but are similar in style and feature a number of the same cast and crew members.

The film is referred to in another film "", where one of the title characters spoofs the eye-stabbing scene and directly refers to "Kassim Selamat".

The film has also more recently been referenced in the song "Gerenti Beres" with the line, "Katakan kau seorang doktor, majistret atau lawyer, ahli musik tak main" ("Say that you are a doctor, magistrate or lawyer; musicians are useless"). This refers to the Nyonya Mansoor's belief that Kassim Selamat, a musician, is more lowly than doctors (specifically Dr. Ismadi in the film), as well as magistrates and lawyers. Nyonya Mansoor's oft-quoted line in the film goes, "Siapa Kassim Selamat? Lawyer, majistret?" ("Who is Kassim Selamat? A lawyer, a magistrate?")