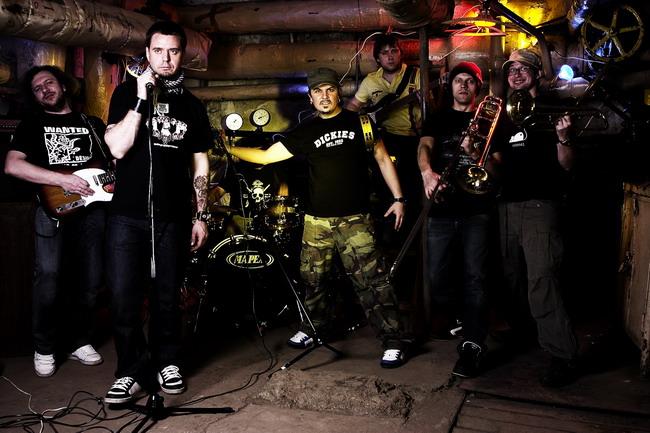 Lyapis Trubetskoy ( _ru. Ляпис Трубецкой) is the most famous ian .

In 1998-1999 their songs could be heard on any major station, their videos were shown on every top both in and countries. Until now their legendary hits like “Au”, “Ti kinula” (“You Gave Me Up”), “Zelenolazoye taksi” (“Green-eyed Taxi”), “V plat’ye belom” (“In A White Dress”) and “Yabloni” (“Apple-trees”) are still popular among all Russian singers. Isn’t it the obvious sign of public acknowledgement? So, for “Lyapis Trubetskoy” the way towards concerts seemed to be open, but…

“We came from the and became popular with our parodies. One day to my horror I realized that our group has become similar to the objects of our parodies and mockery. We were starting to merge with all those pop-star crowd, but I’m not one of them and never wanted to be,” - Sergey Mikhalok, the band’s leader says. He admits that it wasn’t so easy to give up the game and become independent once again.

According to him, “it was very difficult to get our true essence back on top. And the thing wasn’t about any contracts. We had to overcome public opinion and, most importantly, set our own minds free. At first, my internal discomfort from the gap between the authentic “Lyapis Trubetskoy” and its public image was relieved by hard drinking and other stuff, but when my weight peaked at 110 kilograms and my mind was about to collapse, I gave up everything, lost 25 kilograms and started to play the music I like.”

“Capital” is the second independent album by “Lyapis Trubetskoy” after the “Zoloty’ye yaytsy” (“Golden Balls”) created in 2004 under heavy and influence. “While working on “Zoloty’ye yaytsy” we didn’t understand what to do with our . As a result there were some reflex attempts to score a radio with “Rain’ka” or “Pochtal’iony” (“”), - Sergey Mikhalok says. – But this wasn’t the biggest problem. The whole album was overproduced, we tried to mix too many styles, musical instruments and sounds in it. So, we paid too much attention to the form instead of the essence. We were in need of a real professional who could tell us what was good and what was too much.”

That is why searching for a sound producer was one of the main tasks while working on “Capital”. At some point the band wanted to record their album in , in the hometown the legendary British -band “Madness” (one of Mikhalok’s favourites). When almost everything was ready for that, a chance interfered. At a concert in Kiev “Lyapis Trubetskoy” met a famous Ukrainian sound producer Vitaliy Telezin. He worked with , “Brat’ia Grim” and other top Ukrainian/Russian artists. But it wasn’t the thing that attracted Mikhalok and his friends.

“We are from the same generation with him, we had common world outlook, we liked the same music. And it was the music we wanted to record on our new album. I don’t want to offend anyone, but, roughly speaking, for our band he is the first studio guy who didn’t need explanations about what is wave or how “Green Day” and “The Offspring” make their sound,” - Mikhalok says.

And this combination has worked perfectly well. Now it’s already clear that the new album will mean to the band and its fans no less than the legendary “Ty kinula” (“You Gave Me Up”) in 1998 and will give a rise to the new popularity wave for “Lyapis Trubetskoy”. Still, according to Sergey Mikhalok, the of both the new album and the present group is different from what used to be in the years between these two landmarks. He says: “When I started my career I used to write songs that changed me and the world around me, but later I began to create stuff, that didn’t have influence either on me or the world around. At best those songs could be a soundtrack for some wedding or birthday. And what is horrible at some point I even used to be proud of that. But now I have come back to what everything started from – to a mix of and powerful chords.”

have played an important role in the album presentation. The first clip for the song “Hare” (“Enough”), a cheerful wedding -video, was filmed by a famous actor and new wave director . The second clip, animation video “Capital” (starring , and other legendary politicians), which has become a real sensation, was made by , co-author of the legendary “Au” (1998) and “Rozochka” (1999) videos.