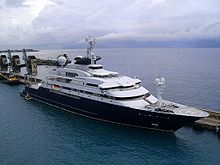 Octopus in Antibes Port Vauban, in 2009

Octopus is a 414 foot (126 m) megayacht owned by Paul Allen, the co-founder of Microsoft. Delivered in 2003, it was believed to be the biggest such yacht at the time of its construction.[1] It is currently the world's 12th largest superyacht, the fifth largest superyacht not owned by a head of state.

Octopus sports two helicopters[1] on the top deck (one in front and one on the back), and a 63-foot (19 m) tender docked in the transom.There are a total of seven tenders aboard. The yacht also has a pool, located aft on one of her upper decks, and two submarines (one of them operated by remote control for studying the bottom of the ocean). Side hatches at the water line form a dock for jet skis.

The exterior was designed by Espen Øino Naval Architects and built by the German shipbuilders Lürssen in Bremen and HDW in Kiel. Her hull is made of steel. The interior was by designer Jonathan Quinn Barnett of Seattle.

Allen also owns Tatoosh, another of the world's 100 largest yachts.

On January 31st 2011 one of the helicopters of the yacht had to perform an emergency landing on the water just after it took off from the yacht whilst sailing in Ushuaia, Argentina. According to an Argentine Coast Guard officer, no casualties were reported and the aircraft had not leaked oil in to the sea.[2]