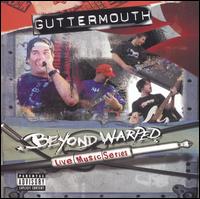 Last album =
This album =
Next album =

"Beyond Warped Live Music Series" is a / by the band , released in 2005 by . The DVD side of the disc contains a 9-song live performance by the band on the 2004 , filmed in high definition and mixed in 5.1 Dolby surround sound. It also contains audio tracks of the studio album versions of each song from the setlist. The CD side of the disc contains the studio album versions of all 9 songs from the setlist. Some of the songs are mistitled on the album sleeve and DVD menus.