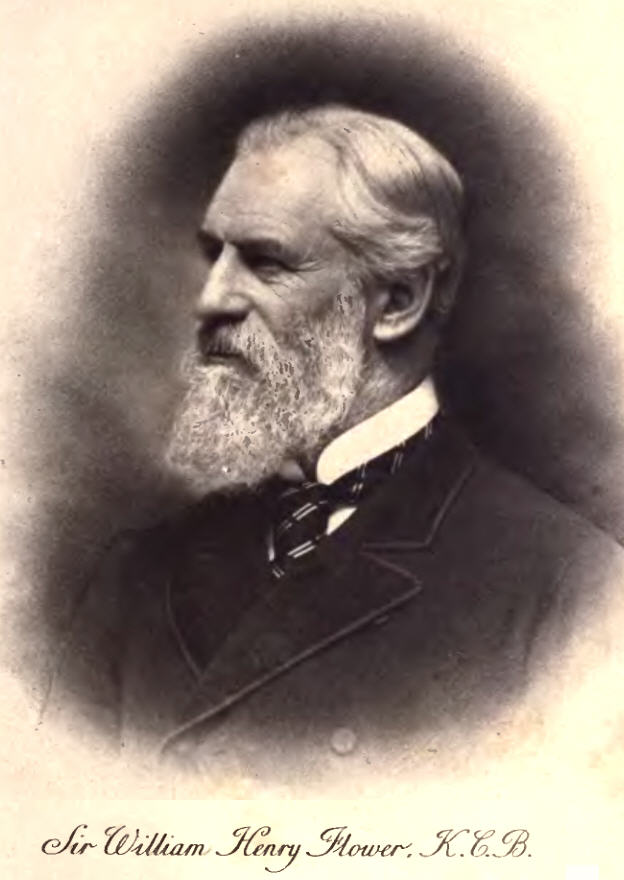 Flower was born at his father's house in Glade Valley "The Hill", . His father, Edward Fordham Flower, had lived in America and was an opponent of the slave trade; the family's antecedents were . When Edward Flower returned to England, he founded a brewery in Stratford-on-Avon and married Celina Greaves. William was at first taught by his mother, and went to a boarding school in at 11.

In 1844 at 13 William was sent to a school in run by a German headmaster, Dr. Heldenmaier. There were ten hours daily schooling, and this included science (rare at that time). Flower was made Curator of the school museum, and for almost the rest of his life he was a museum curator of one kind or another.

William's interest in natural history appears to have been further fostered in early life by interactions with Rev. P.B. Brodie, an enthusiastic zoologist and geologist. William wrote later in life in his book, "Essays on Museums", that he was pleased to create a museum as a boy with a miscellaneous collection of natural history objects, kept at first in a cardboard box, but subsequently housed in a cupboard.

According to his biographers (Cornish 1904; Lydekker 1906), he entered University College London in 1847 at 16. This may be a confusion for UC "School", which was founded to support preparation for UCL. Flower matriculated in Arts in 1849 (Lydekker says gaining honours in zoology), then joined the Medical School at whilst becoming a pupil at the (Lydekker). He passed the 1st MB exam in 1851, receiving the gold medal in Dr. Sharpey's class of & , and the silver medal in & ; the gold medal in the latter subject was taken by his fellow-student, . It seems that Flower never took the 2nd MB exam (passing which would have conferred the basic medical degree). [The slight note of uncertainty is caused by the fact that neither of his biographers seems to know the details.]

In March 1852 Flower read his first paper before the , of which he was a Fellow. He was appointed Junior House Surgeon at the Middlesex Hospital, and after six months promoted to Senior House Surgeon. In March 1854 he passed the exam to become a Member (MRCS) — and not a moment too soon, one would have thought! This is a basic qualification for practising surgery in England. Also in 1854 he became Curator of the Middlesex Hospital Museum.

In 1854 Flower joined the Army Medical Service, and went out to the . He was gazetted as Assistant-Surgeon to the ; and in July 1854 embarked with his regiment at Cork for Constantinople. In four months Flower's Regiment was reduced in strength by almost one half, from cold and exposure, infectious diseases and enemy action.

Flower resigned from the army in 1855 due to ill-health. In recognition of his services, he received from the hands of the with clasps for Alma, Inkerman, Balaclava, and Sebastopol; he received the Turkish medal later.

London: life as a surgeon

In the spring of 1857 Flower took the diploma for the Fellowship of the Royal College of Surgeons (FRCS); and joined the staff of the Middlesex Hospital as Demonstrator in Anatomy. In 1859 he was made Assistant-Surgeon at the Middlesex, Curator of the Anatomical Museum and also Lecturer on Comparative Anatomy. His 1859 lecture to the United Services Institute on practical surgery for naval and military officers was the direct result of his Crimean experience. It summarised the first aid knowledge needed by all soldiers to help the wounded before a surgeon was available.

He married Georgina Rosetta, the youngest daughter of Admiral W.H. Smyth, an astronomer, and sometime Hydrographer to the Admiralty and Foreign Secretary to the . The wedding took place in 1858 at the church of Stone, in Buckinghamshire.

In 1860 London intellectual life was alive with talk of evolution. Flower had long been interested in natural history, and now he decided to move his career in that direction, probably under the influence of , who was also a comparative anatomist, and Fullerian Professor at the at the time. Flower's first contact with Huxley came about from his early friendship with George Busk, Surgeon to the Seamen's Hospital of HMS Dreadnought (a land base near ). Busk was an FRS, became , and a member of the . Flower succeeded as Conservator of the of the on the recommendation of Huxley and others. He started work in January 1862 and held the post for 22 years.

Flower became associated with Huxley's controversy with concerning the human brain. Owen had erroneously said that the human brain had structures that were not present in other mammals, and separated man off into a Sub-Class of its own instead of a genus in the primates. Huxley contradicted this in a debate at the BA meeting in 1860, and promised a demonstration in due course.

Back in London, Huxley consulted with every expert on the brain that he knew, and that included Flower. His conclusions were made public in 1860 in lectures and publications, but most of the demonstrations were done by Flower using monkey brains rather than the scarce ape brains. Over the years, Flower published papers on the brains of four species of monkey, and acted as Huxley's partner in demonstrations at subsequent BA meetings. At the 1862 meeting in Cambridge when Owen read a paper maintaining his claims, Flower stood up and said "I happen to have in my pocket a monkey's brain" — and produced the object in question! (report in the "Times"). Few doubted that the small object had Huxley's finger-prints on it...

Another interesting angle on Flower was his combination of religious belief with complete and unequivocal acceptance of evolution. His point of view was close to that of , the American botanist, who wrote a pamphlet entitled "Natural Selection not inconsistent with Natural Theology". As the years passed this co-existence of ideas became ever more common with those Christians who were not wedded to literal belief in all aspects of the Bible. In 1883 Flower gave an address to the Church Congress in Reading on evolution: "The bearing of science on religion" (reprinted in his "Essays on Museums").

In 1870 he became Hunterian Professor of Comparative Anatomy in succession to Huxley and commenced a series of lectures that ran for fourteen years, all on aspects of the Mammalia. The essence was published in his books of 1870 and 1891. He was President of the Zoological Society of London from 1879 to 1899. In 1882 he was awarded the of the Royal Society.

In 1884, on the retirement of Sir Richard Owen, Flower was appointed to the directorship of the Natural History departments of the in . The four natural history departments were Zoology, Botany, Mineralogy, Geology. Each department had its own Keeper, who was largely autonomous from the Director. At that time the Director was subject to the supervision of the Principal Librarian of the British Museum; now all three institutions (, British Museum and ) are administered and funded separately.

Lynn Barber, in her excellent "Heyday of natural history", paints a too-severe portrait of Flower when she describes him as "an aristocrat and autocrat conspicuously lacking in the common touch... when his assistants complained that they were so poorly paid that their wives were having to take in washing, Flower said yes, he too was feeling the pinch – he had to tell his wife to restrict the use of her carriage." [Barber, L. 1980. "The heyday of natural history 1820-1870". Cape, London: Chapter 'Omnium gatherum'] In the first place Flower was not an aristocrat: his family were Puritan in origin, and his father was a brewer: they were middle-class. Flower's knighthood was awarded for merit, not inherited as a baronetcy. Secondly, figures of authority in that age tended to be aloof by present-day standards, and were generally autocratic in manner. Of course his wife had a carriage! The low pay of the assistants was real enough, though. [Crook, J. Mordaunt. 1972. "The British Museum". London] [Edwards E. 1870. "Lives of the founders of the British Museum". London.] [Gunther, Albert 1975. "A century of zoology at the British Museum". London.] [Gunther, Albert 1981. "The founders of science at the British Museum, 1753-1900". Halesworth, London.]

In addition to his role as Director, Flower also took over from , the ornithologist, as Keeper of Zoology in 1895, remaining so until his retirement in 1898. Apart from his continuing interest in primates, Flower became an expert on the Cetacea (whales and their relatives). He carried out dissections, went out on whaling boats, arranged whale exhibits in the Museum in South Kensington, and studied the new discoveries of whale fossils. It was Flower who made public the "absolute and complete destruction of two species of right whale by the reckless greed of the whalers" (Cornish p175)

His publications were all bar a few on mammals; he was not a field biologist, nor a student of the other vertebrate groups, at any rate in his adult life. He wrote forty articles for the 9th edition of "", every one on a group of mammals.

Flower was an effective Director of the natural history departments of the British Museum, balancing the competing and conflicting needs of the staff, the public, the other professional naturalists, the Trustees and the Principal Librarian. Some later Directors found this difficult until, finally, in 1963, the BM(NH) was hived off as an independent institution. Flower was created a C.B. in 1887, three years after his first appointment to the British Museum, and five years later (1892) followed the higher distinction of the K.C.B. He also received the Jubilee Medal and the Royal Prussian order, "".

He died in London at his 26 Stanhope Gardens residence.

Flower made valuable contributions to structural , publishing, for example, complete and accurate measurements of no less than 1,300 human s, and as a comparative anatomist he ranked high, devoting himself especially to the study of the . His foremost studies were on s, s and s, and he was the first person to show that s are primates.

He also worked on the deformities produced in the human foot by badly-designed boots and other coverings 'among both civilised and barbarous nations'. His "Fashion in deformity" was a favourite theme in which he criticised the use of corsets with illustrations of distorted female skeletons.

Flower was also a leading authority on the arrangement of museums. He insisted on the importance of distinguishing between collections intended for the use of specialists and those designed for the instruction of the general public, pointing out that it was as futile to present to the former a number of merely typical forms as to provide the latter with a long series of specimens differing only in the most minute details. His ideas, which were largely and successfully applied to the museums of which he had charge, gained wide approval, and their influence entitles him to be looked upon as a reformer who did much to improve the methods of museum arrangement and management.

* [http://www.archive.org/details/anintroductionto00flowiala An introduction to the osteology of the mammalia (1885)]