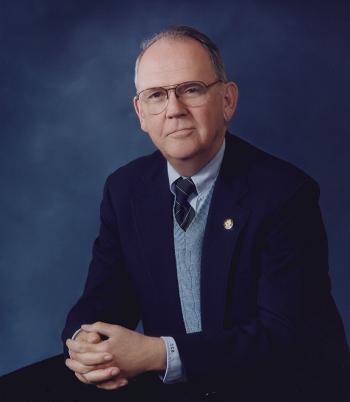 Thomas Cass Ballenger (born , ) is an American politician. A Republican, he represented 's 10th Congressional district ( [http://nationalatlas.gov/congdist/Nc10_108.gifmap] ), centered in North Carolina's foothills, in the from 1986 to 2005.

Ballenger was born in . He attended the and later earned his from . He served in the during .

A plastics executive in his hometown of Hickory, Ballenger had previously served in the North Carolina State House of Representatives from 1974 until 1976, and the from 1976 until 1986. In the November 1986 elections, Ballenger was simultaneously elected to serve the remainder of 23-year incumbent Jim Broyhill's term (Broyhill had been appointed to the Senate) and to his own first term. He was reelected nine more times, all by landslide margins in what, according to some, has become the most Republican district in North Carolina. Not surprisingly, his voting record was very conservative.

As a member of the House Committee on Education and the Workforce, Ballenger chaired the House Subcommittee on Workforce Protections. As chairman, Ballenger drafted legislation that was eventually enacted that reformed the Occupational Health and Safety Administration [OSHA] , making OSHA less adversarial toward American businesses. Like the back country constituents he served, Ballenger resisted the notion of a large federal government and sought to minimize government regualtion.

From 1982 to 2002, Ballenger displayed a black in front of his Hickory home. Some African Americans in Hickory criticized Ballenger for the , which they understood to be a symbol of racism. In 1994, a Democratic opponent featured the lawn jockey on a campaign brochure.

Ballenger, along with his wife, established the Ballenger Foundation in 1990 to raise funds for schools and hospitals in Central and South America. He has been active in that region for over thirty five years, receiving humanitarian awards from various organizations, including the Fabretto Children's Foundation, for his work.

If I had to listen to her, I probably would have developed a little bit of a segregationist feeling. But I think everybody can look at my life and what I've done and say that's not true. I mean, she was such a bitch.

He later apologized, denying that the statement reflected any racist feelings. Rather, he said that he was trying to make a pont that "almost anybody can develop an animosity to individuals," and that he singled out McKinney because he felt she was "less than patriotic." Later, one of his aides was seen painting over the black in Ballenger's yard. [cite news
last = Morrill
first = Jim
coauthors =
title = North Carolina Congressman Apologizes for Remarks about Black Colleague.
work = The Charlotte Observer
pages =
language =
publisher = ,
date =
url = http://www.accessmylibrary.com/coms2/summary_0286-8909380_ITM
accessdate = ]

Ballenger retired in 2004 and was succeeded by one-term Republican state representative . In 2008 presidential election, he endorsed former Massachusetts governor for the Republican nomination [http://www.mittromney.com/News/Press-Releases/Latin_American_Policy_Advisory] and endorsed incumbent in the NC Primaries [http://www.mchenryforcongress.com/UploadedFiles/Letter.pdf] .

He is the great-great-grandson of nineteenth century politician , and was probably named after him. Cass was a Territorial Governor of Michigan, from , , and was the Democratic Party's nominee for in 1848.