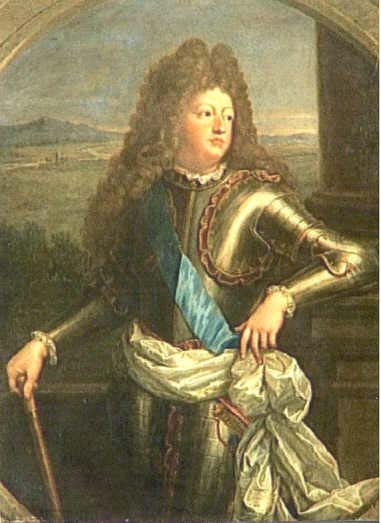 Louis, Dauphin of France ( , - , ) was the eldest son and heir of Louis XIV, King of France and his Queen, Marie-Thérèse d'Autriche. He was popularly known as le Grand Dauphin. This wasn't due to any sense of greatness but, rather, to his large physical size.

Louis' paternal grandparents were and ; he was descended, on his mother's side, from and . Louis XIII and Elisabeth of Bourbon were siblings (the children of and ), as were Anne of Austria and Philip IV, who were the children of and . That means that he had only four great grandparents instead of the usual eight, and that his parents had the same coefficient of coancestry (1/8) as if they were half-siblings.

When Louis reached the age of seven, he was removed from the care of women and placed in the society of men. He received as his governor and was tutored by Jacques-Bénigne Bossuet, Bishop of Meaux, the great French preacher and orator. Despite many indications and reports of intelligence, Louis was perceived as lazy and indolent

:cquote|Louis XIV secretly nursed the same suspicious jealousy of the Grand Dauphin that Louis XIII had once shown to himself. No prince could have been less deserving of such feelings. Monseigneur, as the heir to the throne was now known, had inherited his mother's docility and low intelligence. All his life he remained petrified with admiration of his formidable father and stood in fear of him even while lavish proofs of 'affection' were showered upon him. The best way for Monseigneur to do someone an injury was to commend him to the royal favour. He knew it, and did not conceal it from his rare petitioners.Louis XIV saw to it that his son's upbringing was quite the opposite of his own. Instead of a devoted mother and an affectionate and likeable tutor, the Dauphin had the repellent and misanthropic Duc de Montausier, who ruthlessly applied the same methods that had so disturbed Louis XIII. They annihilated his grandson. [...] Bossuet overwhelmed his backward pupil with such splendid lessons that the Dauphin developed a lasting horror of books, learning and history. By the age fo eighteen, Monseigneur had assimilated almost none of the knowledge amassed to so little purpose, and the apathy of his mind was second only to that of his senses. [Erlanger, Philippe, "Louis XIV", translated from the French by Stephen Cox, Praeger Publishers, New York, 1970, p. 177. Library of Congress Cataglo Card Number: 79-109471]

It was said that, when an adult, Louis could pass a whole day simply tapping his cane against his foot in an armchair.Fact|date=August 2008 Nonetheless, Louis' generosity, affability and liberality gave him great popularity in Paris and with the French people in general.

Although he was permitted at first to attend and later to participate in the Conseil d'en haut, he did not play a particularly important part in French politics. However, as the heir to the throne and, presumably, future king, Louis was constantly surrounded by cabals battling for future prominence. Apart from the minor political role he played during his father's reign, Louis engaged in more leisurely pursuits and was esteemed for his magnificent collection of art at Versailles and his private establishment at Meudon. It was said that he hunted wolves to extinction in the Île-de-France.

Louis' position in the Conseil d'en haut gave him an opportunity to have his voice heard in the years and crises leading up to the . From his mother, Louis had rights and claims to the Spanish throne. His uncle had produced no descendants and, as he lay dying, had no heir to whom he could pass the throne. The choice of a successor was essentially split between the French and Austrian claimants. In order to improve the chances of a Bourbon succession, Louis gave up his rights in favour of his second son, Philippe, duc d'Anjou (later ), who, as second son, was not expected to succeed to the French throne, thus keeping France and Spain separate. Moreover, in the discussions in the Conseil d'en haut regarding the French response to Charles II's last will and testament, which did indeed leave all Spanish possessions to Anjou, Louis persuasively argued for acceptance. He opposed those who advocated a rejection of the will and the adherence to the Partition Treaty signed with , even though that Treaty had awarded Naples, and to him.

Thus, through Bourgogne and Anjou, Louis ensured the continuation of the senior Bourbon line on the throne of France and the establishment of the cadet Spanish Bourbon dynasty respectively.

Louis, on the death of his wife Maria Anna, secretly married Sophie de Joly de Choin. However, his new wife did not acquire the status of "Dauphine", and the marriage was without issue.

At the age of fifty, Louis died in 1711 of , predeceasing his father.

Reportedly, a prophecy told at his birthFact|date=September 2008 said that he would be "son of a king, father of a king, but never a king". This is though to be fulfilled as he was the son of Louis XIV of France and father of (who however revailed in his claim only after his father's death) but did not himself become King.