Umberto I of Italy

Umberto I of Italy 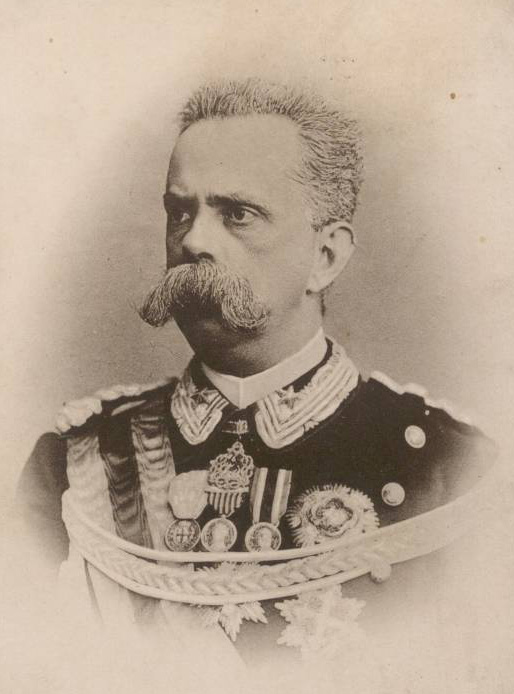 Umberto I, King of Italy or Humbert I of Italy ("Umberto Ranieri Carlo Emanuele Giovanni Maria Ferdinando Eugenio di Savoy"), English: "Humbert Ranier Charles Emmanuel John Mary Ferdinand Eugene of Savoy" (, &ndash; , ) was the from until his death. He was deeply loathed in left-wing circles, especially among anarchists, because of his hard-line conservatism and support of the in . He was killed by anarchist two years after the incident.

The son of Vittorio Emanuele II and Archduchess Maria Adelaide of Austria, Umberto was born in , which was then capital of the , on , . His education was entrusted to, amongst others, and .

From March 1858 he had a military career in the n , beginning with the rank of captain. Umberto took part in the : he was present at the in 1859, and in 1866 commanded the XVI Division at the Villafranca battle that followed the Italian defeat at Custoza.

On , Umberto married his first cousin, Margherita Teresa Giovanna, Princess of Savoy. Their only son was Victor Emmanuel, prince of ; later .

While on a tour of the kingdom, accompanied by Premier , he was attacked by an anarchist, , during a parade in Naples on , . The King warded off the blow with his sabre, but Cairoli, in attempting to defend him, was severely wounded in the thigh. The would-be assassin was condemned to death, even though the law only allowed the death penalty if the King was killed. The King commuted the sentence to one of for life, which was served in conditions in a cell only 1.4 meters high, without sanitation and with 18 kilograms of chains. Passanante would later die in a psychiatric institution, after had driven him insane [Salvatore Merlino, «L'Italia così com'è», 1891 in "Al caffè", by Errico Malatesta, 1922] . The incident upset the health of Queen Margherita for several yearsFact|date=July 2008.

In foreign policy Umberto I approved the Triple Alliance with and , repeatedly visiting and . Many in Italy, however, viewed with hostility an alliance with their former Austrian enemies, who were still occupying areas claimed by Italy.

Umberto was also favorably disposed towards the policy of colonial expansion inaugurated in 1885 by the occupation of in . Italy expanded into Somalia in the 1880s as well. Umberto I was suspected of aspiring to a vast empire in north-east , a suspicion which tended somewhat to diminish his popularity after the disastrous in on .

In the summer of 1900, Italian forces were part of the which participated in the in . Through the , signed after Umberto's death, the Kingdom of Italy gained a concession territory in Tientsin.

The reign of Umberto I was a time of social upheaval, though it was later claimed to have been a tranquil "belle époque". Social tensions mounted as a consequence of the relatively recent occupation of the kingdom of the two Sicilies, the spread of socialist ideas, public hostility to the plans of the various governments, especially Crispi's, and the numerous crackdowns on . The protesters included the young , then a member of the socialist party.

During the colonial wars in Africa, large demonstrations over the rising price of bread were held in Italy and on , the city of was put under military control by General , who ordered the use of on the demonstrators; as a result, about 100 people were killed according to the authorities (some claim the death toll was about 350); about a thousand were wounded. King Umberto sent a telegram to congratulate Bava-Beccaris on the restoration of order and later decorated him with the medal of Great Official of Savoy Military Order, greatly outraging a large part of the .

To a certain extent his popularity was enhanced by the firmness of his attitude towards the Vatican, as exemplified in his telegram declaring Rome "untouchable" (, ), and affirming the permanence of the Italian possession of the "Eternal City".

Umberto I was attacked again, by an unemployed ironsmith, , who tried to stab him near Rome on , .

Finally, he was murdered with four revolver shots by the Italo-American anarchist in , on the evening of , . Bresci claimed he wanted to avenge the people killed during the . Official of the day gave the assassinated King the nickname "the Good".

He was buried in the Pantheon in Rome, by the side of his father Victor Emmanuel II, on , . He was the last Savoy to be buried there, as his son and successor died in exile.

A newspaper report of Bresci's attack was carried and frequently read by the American anarchist ; Czolgosz used the assassination of Umberto I as his inspiration to murder U. S. President in September, 1901 under the banner of Anarchism.

Titles as King of Italy

*"Remember to be a king all you need to know is how to sign your name, read a newspaper and mount a horse".

* [http://www.chivalricorders.org/royalty/gotha/italygen.htm External link: Genealogy of recent members of the House of Savoy]